The PRS for Music Foundation's Europe-wide Keychange project, a large-scale initiative to tackle gender equality in the music business, has spectacular news today: it has achieved commitments from 45 (yes, forty-five) different international musical organisations to make their proceedings gender-equal (yes, 50-50 male-female) by 2022. The organisations in question include the Cheltenham International Music Festival - which has been ahead of the game on this for the past few years, the Huddersfield Contemporary Music Festival, the Manchester Jazz Festival, the Aldeburgh Festival, Roundhouse Rising, Spitalfields Music and, indeed, the Proms. These are just a few examples. 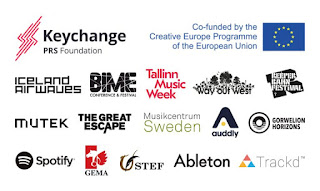 Everyone knew it was time for change; the question was how to make it happen. A century after the first small tranche of women were granted the vote in Britain, it was clear that change of this type doesn't happen on its own. It takes big and ambitious thinking, initiative, imagination, negotiation, tenacity, strong organisation and some active, solid support (in this case, a €200k grant from Creative Europe). Now this splendid development will point the way forward in no uncertain terms.

Speaking to Music Week, Vanessa Reed, CEO of the PRS Foundation, says: "The Keychange network of female artists and industry professionals and the festival partners’ idea of establishing a collective pledge will significantly accelerate change. I hope that this will be the start of a more balanced industry which will result in benefits for everyone.”

Naturally there are some cynical reactions going on - on one side from a certain type of bloke who doesn't like this sort of thing, on the other side from those who wonder why it will take until 2022 in any case (er, FYI, big international festivals usually do start planning several years ahead).

But there's no doubt that the weight of opinion has demonstrably shifted. Imagine all that splendid music we could have had if women had, over the centuries, been accorded the respect and self-respect for creative work that was granted their husbands, brothers, fathers and sons. Imagine those families who would have been happier and more balanced if the mothers, daughters and grandmothers were not angry and frustrated by being kept 'in their place'. The world shot itself in both feet by keeping women down and it's been walking hobbled all this time. Time for change. Thank you, PRS Foundation, and count us in.