Spilt champagne, burnt umber and words that have no sound...

In a special concert for International Women's Day at King's College London on Thursday, there's a chance to explore the music of Silvina Milstein and Effy Efthymiou, with Lontano under the baton of Odaline de la Martinez. Here's a guest post from Silvina telling us about some of the paintings, places and poetry that inspired her to create the works featured - from Argentinian night scenes to Vermeer's earth-toned interiors. Tickets for the concert are free, but please reserve a place via Eventbrite, here. JD

SPILT CHAMPAGNE, BURNT UMBER AND WORDS THAT HAVE NO SOUND
Guest post by composer Silvina Milstein

The Music Department of King's College London celebrates women's contributions to contemporary 'art' music with a concert conducted by Odaline de la Martinez. The programme features recent works by Effy Efthymiou (currently doing a doctorate under my supervision) and a selection of my chamber music written in the past 20 years. The post-concert discussion, chaired by musicologist Matthew Head, will explore what the category of 'woman composer' means to Effy and me. 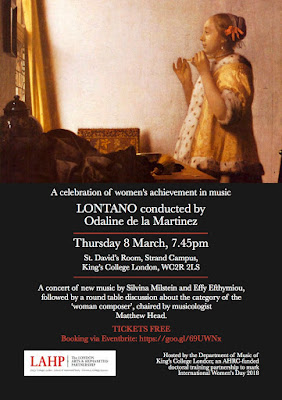 For me, preparing for this concert has been a powerful and mysterious experience, as it has involved revisiting works that go as far back as 1998 (as in the case of Book of Shadows, written for the Endellion String Quartet and a narrator). In those days I was fascinated by Borges's interpretations of Oriental literatures, mysticism and Edgar Allan Poe's macabre imagery. Book of Shadows is a montage of two Chinese tales and a fragment from a story by Poe. Motifs of magic, love and death cast shadows upon each other. In this concert we will hear its second movement (in the version without narrator), depicting Poe's accounts of the images that rush through the mind of a prisoner of the Inquisition as he hears "the dream-sentence of death". It was in this piece that most of the ingredients that make my current musical language emerged.

Approaching death is further explored in "and told her in words that had no sound" from The Undending Rose diptych for solo violin (1999), which takes its title from a poem by Borges, in which the Sufi poet Attar of Nishapur addresses a rose "in words that had no sound, as one who thinks rather than one who prays". Attar has reached old age; he is blind and admits to knowing nothing, but foresees that "there are more ways to go; and everything is an infinity of things". The Sufi images of eternity as experienced by Borges, himself old and blind, approaching the end of his days, reminded me of what Lukács calls "the touch of vertigo...the most profound meaning of form: to lead to the great moment of silence". So I attempted a piece that has the form of a sigh, a sort of exhalation, whose contrasting and precipitous final section, while aspiring to an "unending" quality, eventually turns out to be a sort of cadence.

In the context of a concert to celebrate International Women's Day, I have been reflecting on the extent that female and male voices are reflected in my music. It seems that in the above two works my imaginings were triggered by voices of men articulating universal experiences. But in "cristales y susurros" ("crystals and whispers", for a mixed septet with harp), the source is more overtly erotic and mundane, springing from memories of what I heard as a young woman about the night districts of Buenos Aires. Here, evocative gestures and motives drawn from Buenos Aires vernacular continuously proliferate, echoing the ripples left by a magical night as it is forgotten to later resurface as torn lace, shimmering silk and split champagne.

Contrastingly while composing the other septet to be heard in this concert, "ochre umber and burnt sienna" (2012), the source of inspiration was further remote: I was preoccupied with Vermeer's depictions of women in their private spaces, in paintings that I saw at the Fitzwilliam Museum in Cambridge. While composing this piece I attempted to enter the intimate world of those 17th-century women and became absorbed in a mode of looking at those portraits that involved focusing on how their expressive backgrounds - saturated with tiny strokes of earth pigments - invite us to enter domestic spaces, in which pensive women ponder and rest. H Parry Chapman commented that some of Vermeer's paintings "focus so closely on the solitary, thoughtful, absorbed woman as to create the possibility for self-identification on the part of a female viewer. Of course we can no more read what is inside these women's hearts and minds than we can read what it in their letters. Still we are drawn in by the suggestion of their inwardness. In short, the Dutch domestic interior becomes a metaphor for a kind of interiority that includes women."
SM

Silvina Milstein was born in Buenos Aires in 1956. After the Argentinian military coup of 1976 she emigrated to Britain. At Glasgow University her composition teachers were Judith Weir and Lyell Cresswell, and at Cambridge University she studied with Alexander Goehr.  In the late eighties she held fellowships at Jesus College and King's College (Cambridge), and is currently a professor of music at King's College London.

In addition to composing Silvina has a distinguished career as a teacher and scholar.  Her book Arnold Schoenberg: notes, sets, forms was published by Cambridge University Press.

She has received commissions from leading ensembles and the BBC.  A selection of her chamber works has been recorded by Lontano conducted by Odaline de la Martinez and issued by lorelt.  Several of her most recent pieces for large chamber ensemble --tigres azules (London Sinfonietta and Ensemble Modern), surrounded by distance (London Sinfonietta) and de oro y sombra (Birmingham Contemporary Music Group)-- were premiered under Oliver Knussen.