This Thursday is International Women's Day and the music world is going gratifyingly bananas over it. Here at JDCMB we have already had posts about two of the events and there will be more during the course of this week (and no doubt beyond). 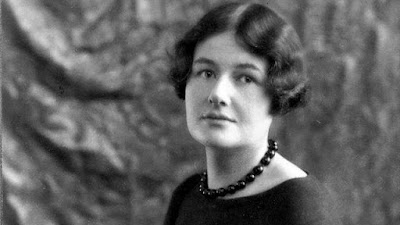 Today I would like to explore the fate of one of Britain's finest historical women composers, someone whose work remains underrated and deserves much better: Rebecca Clarke (pictured above).

Recently I was asked to write some programme notes about Clarke's Dumka, or Duo Concertante, which was being given at the Wigmore Hall by Henning Kraggerud, Natalie Clein and Christian Ihle Hadland, so I spent a little time reading about her. Please visit the Rebecca Clarke Society for more...

Briefly, here are 10 things that happened to her.

1. Born in Harrow to a German mother and American father, she studied violin at the Royal Academy of Music until her harmony teacher proposed marriage. She left.

2. She became a pupil of Charles Stanford at the Royal College of Music instead - his first female student. Unfortunately her father then threw her out of the house and cut off her financial support.

3. She therefore had to leave the RCM and began to earn her living as a professional violist, playing in Henry Wood's Queen's Hall Orchestra. She was one of its first female members.

4. In 1916 she moved - alone - to the USA, where she drew notice three years later when her Viola Sonata tied in first place at a competition at the Berkshire Festival of Chamber Music, sponsored by Elizabeth Sprague Coolidge. She termed this her "one little whiff of success". Coolidge commissioned her Rhapsody for Cello and Piano in 1923.


5. The Viola Sonata, still one of her best-known works, impressed people so much that they couldn't believe it was written by a woman. It was rumoured that 'Rebecca Clarke' must be a pseudonym for a man and it was even suggested that the piece was really by Ernest Bloch. Clarke did not speak up to refute those expressed doubts regarding her genuine authorship of the work until 1977.

6. By 1924 she was back in London and becoming a sought-after violist on the chamber music circuit. She worked a lot with our old friends Jelly d'Arányi and Adila Fachiri. She was a founder member in 1927 of the English Ensemble. However, her composition began to take a back seat.

7. World War II: she returned to America, lived with her brothers and took a post as a nanny. But - was her creativity drying up? Nope. The Duo Concertante dated from about 1941.

8. She married an old friend from her RCM days, the pianist James Friskin, who was on the faculty at the Juilliard School in New York.

9. As late as her nineties, she returned to some of her old pieces and reworked them. She died in 1979 aged 93.

10. Despite increasing recognition of her work at long last, much of her music remains unpublished. Several works were issued in 1998-9. More remains. In fact she wrote more than 100 compositions. In her lifetime, only 20 were published.

Here's hoping that more will emerge, sooner rather than later.

Here's the Viola Sonata played by no lesser team than Gerard Caussé and Katya Apekisheva at the Holywell Music Room in Oxford a couple of years ago. Enjoy.