I had a lovely interview with the Dutch violinist Liza Ferschtman the other week (official version available to read in this week's JC, here) - she will be in London to play Bernstein's Serenade at Cadogan Hall with the Brussels Philharmonic on Thursday 31 May. Her recording of it - and the Korngold Violin Concerto - is highly recommended. During our conversation, I learned that her family was close to the absolute legend of a violinist that was Philippe Hirschhorn. Her father was the cellist of the Glinka Quartet until they left Russia in the late 1970s, her mother was a pianist, and she grew up in the Netherlands with fellow emigré Hirschhorn virtually as honorary uncle.

Hirschhorn, born in the USSR, won the Queen Elisabeth Competition in Brussels, and later settled in the Netherlands - but his career ended tragically, with his death from a brain tumour aged only 50. His sound burned one up like no other.

There was more to say than I could put in the article, so here are some more of Liza's memories.

"For a while, Philippe played second violin in my father's quartet because he loved playing second - it involved less pressure and beautiful inner voicing. My parents both went to the same famous school in Moscow as he did - the Central Music School, for elementary and high school together, and Philippe came there when he was 13. They met then, in the same class. But he was expelled for misbehaviour after about a year - he was burning piano keys and being a bit of a rowdy kid. But, as later in life, at the same time everyone was a little bit in love with him: there was a very devilish-and-angelic thing about him.

He left the USSR already in the mid 1970s and my parents were aware of that, so when they emigrated they picked up contact again and became very close friends. The practical situation was also that he from the early 80s used to teach in Utrecht, round the corner from where we lived, so every weekend when he’d teach he’d stay with us. From as long as I can remember, he’d just be there, practically every weekend, so I always played for him. Sometimes he’d arrive on Friday and I’d be home but my parents weren’t, and he’d say 'OK, play me something...'

"He was not  a particularly pedagogical teacher then - he was still playing a lot himself and he had no idea how to teach children at all. But I distinctly remember I would play something and he wouldn’t necessarily know how to explain something, but he would play it for me on my tiny violin and it would sound incredible! So I'd have that example - the he would give the violin back to me and say 'OK, I’m going to smoke a cigarette now, you can deal with that...'! 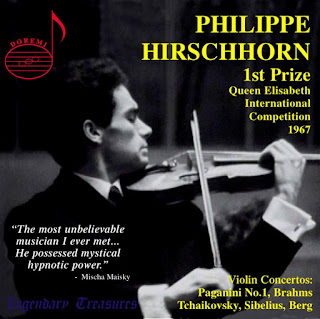 "A little later, in my my mid teens, I would play more regularly and more seriously for him. In the last two years he was unable to play any more himself. They didn’t know what it was for ages. He had neurological failure in his fingers, so they were trying all kinds of physiotherapy, but it was being caused by a brain tumour. Finally they discovered that and operated and he was fine for a short while. Then it came back.

"But when he started to teach me more seriously, there were some very crucial moments. I remember playing a little Kreisler piece, Tambourin chinois or something, with my mother and there was a modulation where something turns suddenly from minor to major quite suddenly. I remember distinctly that he complimented me - or dissed my mother a little bit! - by saying 'Look, she [Liza] got that colour change much better!' But pointing out to me, he was so sensitive to shifting colour - he was the one who taught me what happens at the end of a note, how to make a diminuendo, how to really change something: this awareness of sound at the end of a note, how things shouldn’t die. It’s almost a vocal thing, actually. Those seem tiny little things, but they became so important to me, about how to produce sound and how to listen.

"I won a youth competition when I was 14 and there was a video - and then there was a TV programme in which I had to play the same piece. He would watch both videos and point out to me why something worked or didn’t work in one or the other, not so much things you could put your finger on, but something about tension. And it’s important that someone points it out to you when you’re young, because you become much more sensitive to it and aware of it.

"Still to this day, I’ve been fortunate enough not to have lost too many people and he is still the biggest loss we have had in our family circle. As I said, everyone was always in love with him a little bit. It’s 22 years ago that he died, but he’s still so much in the forefront in my family. I have so many pictures of him in my violin case. I called him my uncle, but he was much more than that."

Here is Liza playing the Beethoven 'Kreutzer' Sonata with pianist Julien Quentin. Occasionally - very occasionally - I come across a musician who looks a bit like me and plays exactly as I'd have wanted to had I been any remote use as violinist, and I wonder if Liza might be a long-lost soul-sister. Don't miss her Bernstein if you're in London (book here).