Mrs Bach is in town on Saturday

My words&music show BEING MRS BACH is at Kings Place on Saturday at 5pm, part of the venue's magnificent Bach Weekend. More info here: please join us!

With harpsichordist Steven Devine, baritone Benjamin Bevan and cellist/gamba Jonathan Manson we explore the story of Anna Magdalena Bach, looking back on her life from her last days when she was tragically forgotten - even by most of her large family. From gifted young soprano to mater familias and sidekick-in-chief to her overworked husband, and the terrible operation that hastened his death, we follow her through arias and solos that reflect the emotions and preoccupations of the Bach family's Leipzig life. https://www.kingsplace.co.uk/whats-on/classical/being-mrs-bach/


Here's a little interview I did for Kings Place's website: 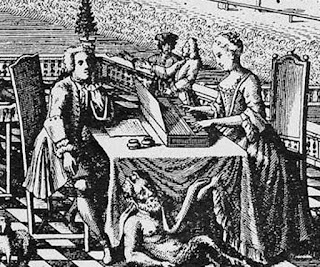 Why did you want to create an event around Anna Magdalena Bach?

The initial suggestion for ‘Being Mrs Bach’ came from the pianist Kathryn Stott, artistic director of the Australian Festival of Chamber Music. She knew about my various narrated concerts and thought this would be an exciting creation to add to a Bach Day for the 2018 festival. The idea was to bring Anna Magdalena to the fore in her own right and try to find out more about who she really was. I loved the idea and it was a joy to be part of that lovely event in Far North Queensland.


How did you go about researching it?

Besides the usual reading etc, I went to Leipzig! I completely fell in love with the place. It has an extraordinary wealth of musical associations, including Schumann, Mendelssohn, Grieg, Brahms and Wagner, and takes great pride in this legacy. The Thomaskirche, where Bach spent much of his working life, is still much as he would have known it. I attended a service and a concert there, trying to immerse myself in its atmosphere and acoustic. The Bach Museum is a treasure-trove: here one can explore the layout of the Thomasschüle where Bach taught, read a great deal about the family, listen to a wealth of music examples and even see a few rare relics - including the buckle and thimble that were retrieved from what was thought to be Bach’s grave.


What struck you particularly about her life and work?

While too little is known about her personality, a few key facts make it possible to join dots and colour in blanks. She was a very fine musician and singer: she was employed at the court of Anhalt-Cöthen as a soprano in Bach’s ensemble when he was Kapellmeister, which is where they met. Unfortunately when they moved to Leipzig, town regulations decreed that women were not allowed to sing in public! I expect she sang at home, though… She loved both nature and nurturing (children, stepchildren, birds, plants and constant visitors). This was just as well, because she inherited four step-children when she married Bach, who was a widower 16 years her senior - and she went on to have 13 children of her own (sadly fewer than half survived to adulthood). She must have been Bach’s greatest support, both personally and professionally, in the latter capacity serving as copyist and collector, especially of the ‘Anna Magdalena Notebook’. I think she may have had the constitution of an ox.

Nevertheless, the painful truth is that Anna Magdalena has been desperately neglected, both in her lifetime and beyond it. She survived Johann Sebastian by nearly a decade, but ended up in a hand-to-mouth existence, reliant on charity. Then, when Bach’s body (or what they thought was his) was first exhumed in 1894, the skeleton of a younger woman was found with him. They reburied him elsewhere - and left her behind.


Do you think she really did write the cello suites, or any of her husband's music?

It’s not impossible, but I’m afraid I’m not entirely convinced.


What music did you want to include in the event?

We needed repertoire that would illumine the narration so that words and music cohere as a sequence. For instance, an extract from the Coffee Cantata picks up on the tribulations of having teenage children! I particularly wanted to end with ‘Mache dich mein Herze rein’ from the St Matthew Passion so that this otherwise tragic story would have an uplifting, transcendent conclusion. Meanwhile, there are solos for Steven Devine and Jonathan Manson as well as various contrasting arias for Ben Bevan. We have added, quite late, the aria ‘Komm, süßes Kreuz’ (also St Matthew Passion) because it includes a magnificent viola da gamba obbligato and therefore shows off all three musicians to the utmost.