Here in our haven... 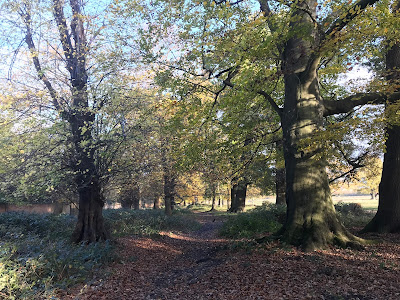 It's been a hectic few weeks and a bout of tonsillitis didn't help. So from the tranquility of a plane-less Monday morning, in company with a snoring cat and a violinist practising Paganini downstairs, here's a quick update and some links for a catch-up.

First of all, because of a sudden, belated and unexpected lockdown (thanks, Boris...) everyone's carefully laid plans for distancing audiences at concerts went up in smoke and everything for November got cancelled. There's been a scramble to rethink, reimagine and reschedule. The Up Close and Musical festival at the Fidelio Orchestra Cafe has been moved to May, my 'Immortal' concert with Piers Lane for the Barnes Music Society has been rescheduled for 16 January, and the Nordern Farm performance has unfortunately had to bite the dust. There are a few other dates in the diary for June, but let's cross that bridge when we come to it.

One of the events that I was most sorry to lose this year was the staging of the youth opera The Selfish Giant by the composer John Barber, for which I did the libretto. It was meant to happen in July. Now we are hoping that it will be able to enjoy a performance in some way, shape or form next summer instead. Like The Happy Princess with composer Paul Fincham in 2019, it's a commission from Garsington for their youth companies, and this time it is also a co-commission from Opera North. The story is a transformation of an Oscar Wilde fairytale. It is all about the beauty of nature, how much we need it, how much we need to be at one with it, and how completely stupid it is to build walls between different peoples and different generations. We need to work with nature and with each other to build a better world - because one day we will leave it, and then what is our legacy?

"Here in the garden, our haven, here in the garden, our heaven; here we can be who we're meant to be, where we find ourselves and are free..." When we wrote the piece we had no idea that this year the beauty of nature would become what would sustain our young performers who were indeed cut off from their friends, their schools, their rehearsals and their joy in singing together. They made a film about it, using some songs from the opera. It's called Our Haven and Garsington released it on Friday for National Children's Day. Here it is: https://youtu.be/jJK1Rc1DdFU

Meanwhile, the Zoom launch for 'Immortal' went off with much more zing than I'd thought possible. We had more than 50 attendees from all over the world, which was astounding, and the support of Joanna Pieters, who presented and interviewed, Simon Hewitt Jones, who produced, and Mishka Rushdie Momen, who played, was absolutely incredible. Although I was alone in the study, and Ricki slept in a chair behind me all the way through, I felt as if we'd had a real party. If you didn't see if and you'd like to, the whole thing is now on Youtube, here.

Soon afterwards, I found myself roped into a reimagining of an event for the wonderful Wimbledon International Music Festival, a favourite calendar highlight of mine here in south-west London. Normally the inimitable Anthony Wilkinson brings world-class music to live stages on his own doorstep, but of course this time everything had to be moved online and replanned for the format. You can see the lot for a small fee at their website - and yes, one should have to pay to watch music online, because making these things costs and otherwise there soon won't be any. The festival includes some amazing concerts such as a cello and piano recital of Beethoven by Raphael Wallfisch and John York, a typically thoughtful and eclectic programme from pianist Clare Hammond and a star highlight filmed at Wigmore Hall with Paul Lewis performing the Beethoven Diabelli Variations. If you think there's a Beethoven theme, you're right; the event into which I was parachuted was a discussion with pianist Piers Lane, actor/director/writer Tama Matheson and festival director Anthony Wilkinson exploring the magic of Beethoven and, beyond that, what the arts really mean to us, why we need them and where we go from here. All details here.

Next, a call from The Sunday Times. There's a new biography of Mozart just out, by the splendid Jan Swafford, the musicologist and composer who seemed to capture the nation's hearts when he appeared in the BBC series Being Beethoven. This latest book is 800 pages long, which I didn't completely realise until after I'd agreed to review it, but it is such a lovely read that I felt a bit bereft when I'd finished. The review was in yesterday's paper and is online (£) here.

Yesterday, too, I was on Talk Radio rabbiting about Beethoven and 'Immortal'. There's been an enthusiastic blog tour of book site reviews, and we're waiting with slightly nibbled nails for further reviews to appear in print. In general, though, I would advise any budding novelists to check in advance that their release date does not coincide with a very important American presidential election, because firstly nobody will have eyes for much else, and secondly nothing that you write will ever be able to match up to the bizarre reality unfolding in front of our eyes there.

As the divine Joni Mitchell sings, "something's lost and something's won, in living every day... I really don't know life at all."

Let's keep on keeping on, and remember the beauty in the garden.