Newsround: The Long Road to Parsifal

My Internet is back, so very quickly, before it vanishes again, here's a little newsround.


Don't miss this blog by conductor Michael Seal, who tweets as @batonflipper, about how Andris Nelsons dropped out of the CBSO tour and he had to step in at an astounding 20 minutes' notice. There followed a massive programme with Jonas Kaufmann singing the Kindertotenlieder. By all accounts Michael did magnificently. Is this his big break? Let's hope so. Interesting, too, to hear about how Der Jonas responded when a member of the audience shouted at him after his first song to step forward because they couldn't see him...

THE RETURN OF MAXIM VENGEROV


He's been around, but not playing the violin: an injury has kept him away from the fiddle on a sort of enforced sabbatical. But now he's back at last. Maxim Vengerov is on In Tune on BBC Radio 3 today, playing and talking, sometime after 4.30pm. Tomorrow he'll be giving his first Wigmore Hall recital for around 20 years, with Itamar Golan at the piano. I was at that last one, and I will never, ever forget it. He was 14 and there, on stage, was a spotty schoolboy playing for all the world like Jascha Heifetz. I am sure everything will be different now - have the intervening decades mellowed him, or will he be that same virtuoso daredevil? It's a comparatively restrained programme: Handel, Bach and Beethoven - but of course music doesn't get any greater than the Bach D minor Partita and the Beethoven 'Kreutzer'. Go, Maxim, go! 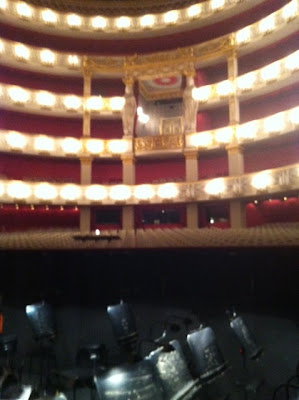 That, in case you wondered, is a view from the pit at the Bavarian State Opera, Munich, where our Tomcat is currently working, having taken extra time away from London. His own enforced sabbatical (rather different from Vengerov's) has done him the power of good - and the particular ironic trajectory by which this Buxton-raised son of German-Jewish refugees from Berlin fetches up in Munich, playing Wagner's Parsifal at Easter, is something that you couldn't make up. The orchestra is fabulous, he says, with no weak links; it functions with plenty of space, great facilities, grown-up attitudes and, not least, crack football teams for both sexes. Right now he's being shown the town by Wilhelm Furtwangler's great-grandson, who happened to be sitting next to him on the plane.
Posted by Jessica at 9:21 am Links to this post

A quick update from our friends in Munich: the doughty Damenfußballmannschaft des Bayerischen Staatsorchesters has scooped first prize in that competition for Brigitte Magazine - partly thanks, I don't doubt, to the helpful viewing and voting of JDCMB readers! :-)

The Bavarian State Opera Orchestra Women's Football Team cites as its colours 'Bordeaux - Champagne' and as its mascot 'Maestro Kent Nagano'. It is now the proud winner of a van worth some E29,000. Stats tell me that the triumphant video by fab fiddler Corinna Desch, recently featured on JDCMB here, has been one of our most popular posts this year. In case you missed it, here it is again:

Below, the team manifesto. If you need to translate it, go and listen to Jonas Kaufmann singing Die schoene Muellerin and you may come out, as I once did, mysteriously fluent in German for approximately 56 minutes. But in case Jonas is stuck in the volcanic ash in Iceland, I can tell you that among the team's answers are: Worst place to be: In the orchestra pit next to the piccolo; and Our dream: a tournament with many teams from orchestras, women and men!