SO heartening to attend two Proms within a week that included a) world premieres and b) full houses. Here's my write-up of last night's new works from Jonathan Dove and Dieter Ammann, alongside Beethoven 9, in The Arts Desk. Taster below. And a PS: I seriously did not envy the page-turner her job.


Time was, not long ago, when the very word “premiere” was enough to ensure a sizeable smattering of red plush holes in the Royal Albert Hall audience. It seemed people did not want to risk attending new works for fear they would sound ghastly. Any artform depends for its lifeblood on strong new creations and an audience for them; so it is excellent that this concert was the second in a matter of days in which the place was packed out for a Prom including brand-new pieces. In a time of welcome diversity of styles and approaches, are music-lovers finally becoming curious, even eager, to hear the best of what today’s composers have to offer? I hope so - because otherwise it would mean everyone was only there for Beethoven’s Ninth Symphony yet again.
This programme included two world premieres. Jonathan Dove's We Are One Fire is a 90th anniversary celebration for the BBC Symphony Chorus, inspired by the message of humanity in Schiller’s Ode to Joy and drawing on the idea that, in the composer’s words, “20th-century archaeology showed us that we are all indeed brothers and sisters”...
Read the whole thing here.

Proms to World: We're still us 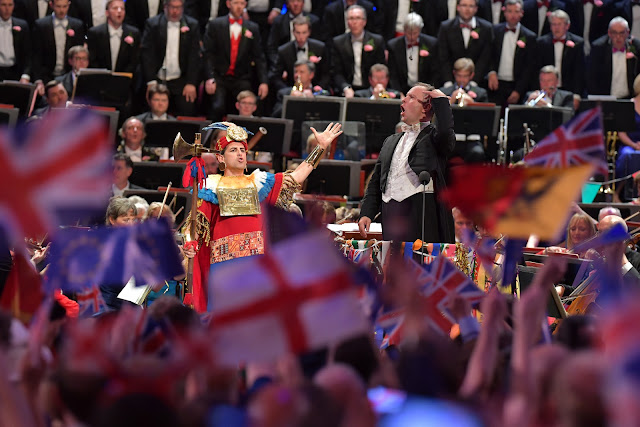 Here are some pics from the Last Night of the Proms: Juan Diego Flórez serenading Paddington Bear - Britain's beloved fictional character is from Darkest Peru, remember - and (above) singing 'Rule, Britannia' dressed as arguably the Last King of the Incas, with Sakari Oramo holding the fort from the podium and a plethora of different international flags happily rubbing colours together throughout the arena. Photo credits: all BBC/Chris Christodoulou. 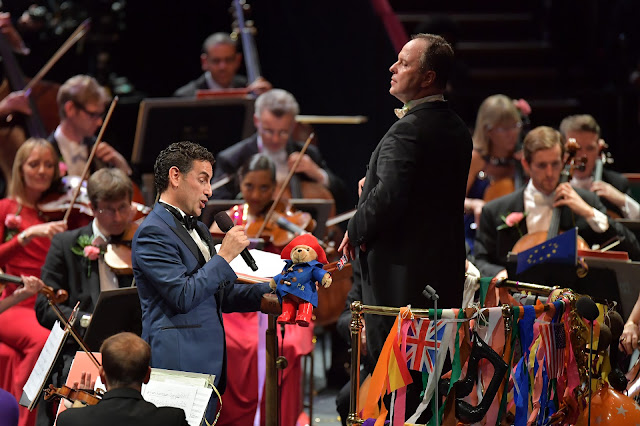 You know something? If we hadn't known about Brexit, we wouldn't have guessed it was (supposedly) happening. If we hadn't read in the right-wing press that nasty Remainers were printing EU flags to stir up trouble, we would have thought there were just as many other-nation flags around, including EU ones, as there usually are at the LNOP (and I've not seen or heard about any trouble at all - the notion that some pro-EU riot would happen seems to have been fictional, not that the Leave camp is known for making things up...).

And if we thought that the UK has turned overnight into a vicious, small-minded, xenophobic nation bent on economic suicide for the sake of keeping out foreigners, we should think again. There are those elements here, as everywhere; and there have been some vile incidents of hate crime around the country, which could possibly have been stirred up by the Brexiters' rhetoric during the campaign. But it's not the whole picture - far, far from it.

Because what the LNOP tells us is that at heart we're the same as we always were: a bit bonkers, zany humoured, welcoming, and loving a big party with a noisy communal singsong. Sakari (who as you know is Finnish) made a beautiful speech about the deeply magical power of music to transcend petty differences and unite us in our shared humanity. Ultimately the entire spectacle rather revived hope and faith in London's ability to remain the splendid multicultural melting pot as which it has flourished these past decades.

As for 'Rule, Britannia', you don't have to sing it if you're watching at home, but if nobody can hear you, you can always consider some alternative words such as: 'Rule, Britannia! Britannia waives the rules...Britons have been led astray by self-serving fools'. 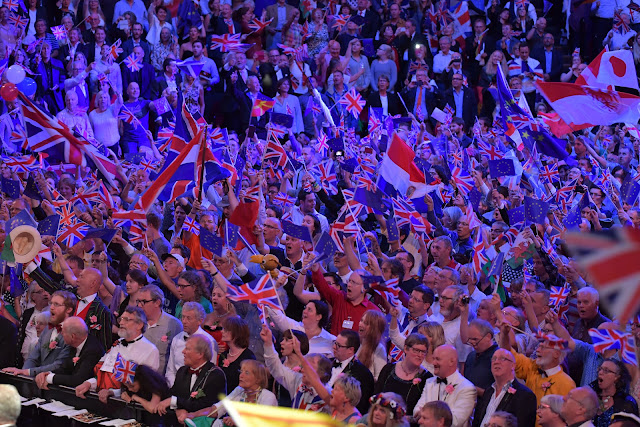 ...It's Sakari Oramo. Rumblings yesterday about "a Finn" have left little surprise about this. Want to see who's about to be announced when an appointment's in the offing? Check who's been working with the orchestra recently, matches the nationality in question and got great reviews. Oramo was in town for a Sibelius cycle with the BBCSO in the autumn and the critics glowed with many-starred write-ups.

This is seriously good news for orchestra and conductor alike. Look at Oramo's track record with the CBSO: the odds were stacked against him when he took over from Rattle, yet he brought in a batonprint all his own, championing much British music - including resuscitating, almost single-handedly, the reputation of the long-lost John Foulds. He is a lovely character and a terrific musician: a Finn in tune with Britain, British music (he won the Elgar Medal in 2008) and contemporary music, all important concerns with the BBCSO. Read more about it here.
Posted by Jessica at 9:47 am