(English translation here)
Posted by Jessica at 8:03 am

Roll over, Riverdance: this is Rhinal Tap

In case you haven't yet seen this extract from The Nose, courtesy of the Royal Opera House and director Barry Kosky, here it is.

And here's my review of this gleefully nuts early Shostakovich opera, at the Critics' Circle website (I forgot to post it when it first came out, but hope it's still reasonably entertaining).

For Barrie Kosky’s Royal Opera debut you could only expect the unexpected. The Australian director, head of Berlin’s Komische Oper, picked a work that has never before been staged at Covent Garden. It’s an extravagant, radical and often very loud take on Gogol’s surreal story in which Platon Kuzmich Kovalyov wakes up to find his nose has gone walkabout and is living the high life in St Petersburg. Premiered in 1930, but dreamed up three years earlier when the composer was 21, it’s so off-the-wall and tonally anarchic that it could almost have been written three decades later...

...Not for nothing has Kosky (going against his own policy at the Komische Oper, where he prefers opera in its original language) plumped for English rather than Russian; the earthy and up-to-date new translation is by David Pountney. It’s helpful to understand it in real time as it careers by with reference piling on reference: Cabaret, Yiddish theatre, Freudian association, Jewish jokes, Russian legend, this Nose knows it all. “Oy gevalt! The 8.23 to Kitezh has been cancelled – they couldn’t find it...”

If you want to read symbolism into it, help yourself. Is The Nose about keeping people in their hierarchical place, or about losing another person who’s part of you, or a euphemism for fear of losing another body part, with everything that implies? Or is it just pre-Python surreal nonsense? Maybe all, possibly none: Kosky lets the options flit by in front of our, er, noses, and leaves the decision to us....
Read the whole thing here.


This year, as everyone has already noted, has taken many amazing people out of this world. The latest is the composer Pauline Oliveros, creator of the concept of Deep Listening and music to match, who has died at the age of 84.

“In hearing, the ears take in all the sound waves and particles and deliver them to the audio cortex where the listening takes place. We cannot turn off our ears–the ears are always taking in sound information–but we can turn off our listening. I feel that listening is the basis of creativity and culture. How you’re listening, is how you develop a culture and how a community of people listens, is what creates their culture.” -- Pauline Oliveros, 2003

Read more about her here.

Here is A Love Song by and for her.

What is Deep Listening?

Deep Listening Institute (DLI) promotes the music and Deep Listening practice of pioneer composer Pauline Oliveros, providing a unique approach to music, literature, art, meditation, technology and healing.  DLI fosters creative innovation across boundaries and across abilities, among artists and audience, musicians and non-musicians, healers and the physically or cognitively challenged, and children of all ages.  This ever-growing community of musicians, artists, scientists and certified Deep Listening practitioners strives for a heightened consciousness of the world of sound and the sound of the world.
Deep Listening Institute has merged with RPI to become
Center for Deep LIstening at Rensselaer
under the direction of Tomie Hahn.
For information on programs please contact Hahnt at RPI.edu.


I had a terrific interview with the conductor Susanna Mälkki for Opera News, ahead of her debut at the Met, New York, with Saariaho's L'amour de loin.

Here's the whole article, with a little taster below...


WITH CONSCIOUSNESS about the situation of women conductors expanding, and creative initiatives springing up around the world to combat the inequality, observers might conclude that the battle is almost won. This is not entirely the case. “I think the biggest change actually is on the public side,” says Mälkki. “I’ve met a lot of musicians who have been totally fine about a woman conducting, but it’s taken such a long time for the business to catch up with it—and also the press. And I think those two have been the slowest to react, because they may have been wanting to cherish old images of—well, you know what I’m referring to!” Indeed—the grand maestros of the past, those controlling, all-powerful alpha-males.
Even so, the role’s challenges in reality have nothing to do with gender. “I think conducting is a 360 degrees kind of work, because there are so many different responsibilities,” Mälkki says. “It’s a job where you should be everything to everybody. People have so many different expectations, and these can be sometimes really disconnected from the music at hand. I think the pragmatic side and the pragmatic training for it—keeping one’s feet on the ground and concentrating on the music—has definitely helped me, and little by little I’ve developed my way to deal with the rest.
“In terms of music-making, what I find interesting to see in retrospect is that working with living composers has always been such a central, essential and natural part of my work as a conductor—and that’s going back to the basics. That’s what this profession is about. Therefore I’ve been following the other discussion feeling sometimes frustrated and sometimes amused, because I’ve been happy to be working on the real issues with real substance all the time—and contemporary composers have been extremely happy with what I’ve been doing.” ...
http://www.operanews.com/Opera_News_Magazine/2016/12/Features/360_Degrees.html

Tomorrow: Hungarian Dances is at The Sage, Gateshead! 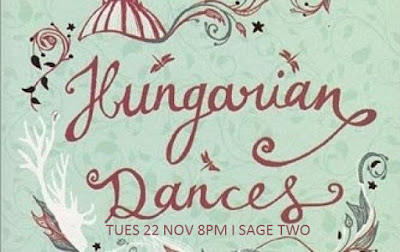 Tomorrow I'm off to Gateshead to present the Hungarian Dances Concert of the Novel at The Sage, our violinist Bradley Creswick's home hall - and, indeed, home hall of the project, which was premiered there in 09, having been suggested to the Fiddles on Fire Festival by a canny librarian. Bradley, who on other days leads the Royal Northern Sinfonia, plays the living daylights out of the Gypsy repertoire - expect some surprises! - and he and Margaret Fingerhut have been working together since their college years. It's incredible to be on stage with them, and super-exciting when it's at The Sage, one of the best arts centres in the country.

Looking forward to seeing lots of North-East friends and enjoying Newcastle-Gateshead, which is not unlike Budapest: two different cities joined by a magnificent river and its bridges.

More info and booking here. (And if you are into praying, please pray for no disruption on the railways...the weather is a bit wild...)
Posted by Jessica at 5:47 pm