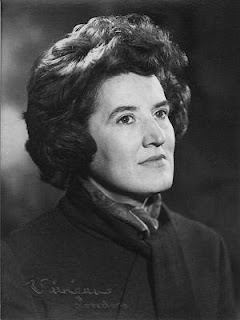 Breaking news on Gramophone's website reveals one of the most extraordinary stories to have come our way, ever.

A few years ago, Gramophone's critics began to rave about an unknown British pianist, a lady named Joyce Hatto [above, photo Vivienne of London 1973, reproduced on Musicweb International]. Just look at this review, by one of their leading piano men, from the Awards issue 2006:

Recorded between 1990 and 2004, these performances are reissued in brilliantly refurbished and clarified sound, forming part of a 100-CD discography. Indeed, it is no exaggeration to say that no other pianist, male or female, would even have considered such a comprehensive undertaking.

Doubting Thomases, of which there are apparently many, may well wonder how Joyce Hatto achieved such unalloyed mastery and musicianship when tragically beset with ill-health. But others will surely celebrate an awe-inspiring triumph of mind over matter, of the indomitable nature of the human spirit.

Even in the most daunting repertoire, her poise in the face of one pianistic storm after another is a source of astonishment. Her warmth, affection, ease and humanity strike you at every turn, her scale and command without a hint of superficial or hard-nosed virtuosity. Here, Liszt's occasional histrionics and theatricality are tempered with the most aristocratic quality.

In Preludio, the dazzling curtain-raiser, Hatto yields nothing to any other pianist in fearless authority, while the notorious difficulties of Feux follets are resolved with a surpassing fluency and vivacity. She is no less gloriously responsive to La ricordanza's heady romanticism (for Busoni, 'like a packet of yellowed love letters') and Etudes Nos 10-12 are natural triumphs of an unswerving vision and poetry, concluding performances that form a rare tribute to their symphonic weight and breadth, the quasi-orchestral might of Liszt's outsize opus.

The same attributes apply to Hatto's Chopin-Godowsky. And whether you consider Godowsky's elaborations delectable or outrageous - or both - you will only hear pure music from this pianist. Listen to her in Ignis fatuus (No 4) where, as Hatto herself ruefully puts it, Godowsky adds a few extra hours to your practice, or in the 'touch of paprika' she notes in the coda of No 7; in No 27 where Godowsky turns innocence into experience and sophistication with a vengeance, or in No 8 in what Hatto calls 'a riot of bravura ingenuity' ' you can only listen and wonder. Amazingly, she has all the time in the world to make her points in the turbulence of No 20 and what gentle sparkle, what unforced brilliance in 'Badinage', where Godowsky so mischievously gives you two Etudes for the price of one.

Joyce Hatto may well be 'the greatest pianist no one has heard of'; her work demands a book rather than just a review.

I heard rumours some time ago querying the authenticity, or otherwise, of Hatto's recordings, but didn't take much notice: British critics are notorious for ignoring home-grown female pianistic talent, so Hatto's lifetime of neglected genius didn't seem unconvincing. But recently another Gramophone piano critic had a strange experience. He popped the Liszt disc into his computer's CD player and iTunes identified it...as a recording on BIS by the Hungarian pianist Laszlo Simon. Gramophone sent off both recordings to have their wavelengths checked. They turned out to be identical - except for two tracks, which were identical with a CD called Nojima Plays Liszt.

The plot thickens. The engineer checking the waves thought the Godowsky, so glowingly reviewed, sounded a little odd. Sure enough, it turned out that the recording had been 'stretched' by 15.112 per cent ("all the time in the world," eh?). When the 'stretch' was undone, the soundwaves proved identical with a recording by Carlo Grante. And her Rachmaninov piano concertos recordings? Yefim Bronfman on Sony.

If her glorious Liszt recordings really are Laszlo Simon's, I think he can open some champagne.

Here is the evidence, from Pristine Classical.

Here's her obituary from The Guardian, describing her as 'one of the greatest pianists Britain has ever produced'...

An interview with her from Musicweb International.

And a fascinating article about her by Ates Orga.

The mind boggles. Updates when I have any.
Posted by Jessica at 1:34 pm