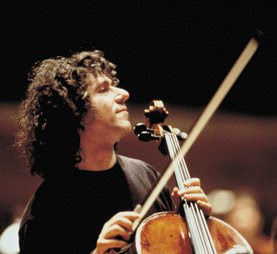 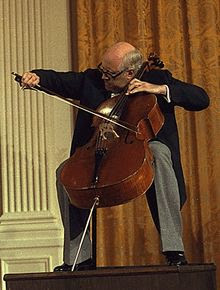 Ace cellist Steven Isserlis has a personal tribute to Rostropovich in today's Grauniad. Steven's one of those rare musicians who writes so well that he could put the rest of us out of a job. Here's a tempting extract:

Not surprisingly, considering the energy and passion with which Slava approaches every aspect of his life, he has a fearsome temperament. Once, his younger daughter Olga, who was studying the cello, thought her father had gone out, and settled down to read when she should have been practising. Unfortunately for her, Slava returned unexpectedly. Furious, he picked up her cello, brandished it and started chasing her with it, telling her to stop so that he could kill her (a request that she not unreasonably chose to ignore). Eventually, she ran out of the house, but he kept after her - and goodness knows what would have happened had they not passed Shostakovich, who happened to be walking nearby. He pleaded with Slava to calm down, and order was eventually restored; but I'm sure Olga learned to practise more diligently after that - or at least to lock her door.

NOTE: This is Post No. 501 on JDCMB.
EXTRA NOTE TO LONDON READERS/SELF: Don't forget to show up at Sheen Library for talk tonight.
Posted by Jessica at 8:00 am