A Diable of a tenor: meet Bryan Hymel

You have to hear Bryan Hymel, the American French-style "heroic tenor" who's about to sing the title role of Robert le Diable at the Royal Opera House. He has already become the darling of Covent Garden, stepping in to replace an indisposed Jonas Kaufmann for Les Troyens earlier this year and earning out-and-out raves. I've had a good chat with him about Robert - especially about the particular quality of voice that is required for it, and that he has, and that is a rare marvel today: in a way, the white tiger of the tenor jungle. Just listen to this, from Rossini's Guillaume Tell.

JD: So, Bryan, how’s it going?
BH: Really well! Each act has its own feeling and mood - it’s good to get into each one. I’ve done the opera before, but only in concert. With this production it’s exciting to see the possibilities, and the stylised way that Laurent [Pelly] envisions the piece is great. It’s a lot of fun.

JD: What are the special challenges that you face in this role? 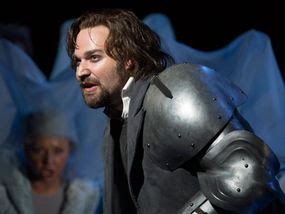 BH: First, it’s really high. The range and the majority of the notes lie in a very high part of the voice. This range and the length of the opera are the biggest challenges: my approach is to take it in little chunks, digest them and make sure I’m singing as efficiently as possible. Fortunately I had the chance to do it in concert, just concentrating on the singing and the music, so I was ahead of the game, knowing what to expect of that. What’s going to make it exciting for the audience is also what’s exciting and challenging for us, because all the four main characters’ roles are written that way. They use the whole range, well over two octaves - and the soprano has almost two and a half octaves. You don’t hear that very often, even in things like Lucia. It's extremely virtuosic singing, but the interaction between the characters, especially Robert and Isabelle, is also very dramatic. He thinks she’s left him for another knight and he’s the scorned lover; and in Act 4 he has to fight away the crazy nuns in the ballet. I think the spectacle and the drama will be very exciting in the house.

JD: Do you think the melodramatic quality and the virtuosity is what made it such an incredible success in its time?
BH: I do, and I think you have to have the singers and actors that can pull it off. And there are some wonderful moments – that’s an integral factor for any piece to stand the test of time. Maybe it’s 30 seconds or one aria that the audience is waiting for - and there's at least one such bit in every act. There are some really beautiful stand-alone pieces. I hope it will be a reawakening of this repertoire. But it’s hard, especially when times are tough and there’s not a lot of money; a lot of forces are involved in this opera, a big orchestra, the chorus and the ballet. 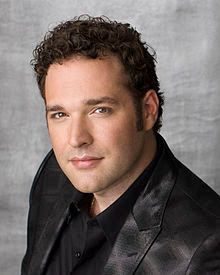 JD: How would you account for its neglect?
BH: I think it’s really hard to cast! It’s difficult to get four singers together at the same time who can sing these parts. They contacted me about this over three years ago - it was planned that far in advance. At the time everyone was the same [as the concert performance] except Diana Damrau who’s just had a baby – she’s the only one not here from the original team. It’s not standard repertoire and none of us knew the roles before that. The last time it was done on stage was in Paris in the late 1990s. You need the time to learn the role and get it into your body because it’s not just about singing the notes. You have to be able to do it in an artistic way while still giving the illusion it’s easy. This is the hardest thing I’ve ever had to sing, by a good bit!

[UPDATE, 3 December 12 noon: the ROH has just announced that the role of Isabelle will not now be sung by Jennifer Rowley, but instead by Patricia Ciofi and Sofia Fomina.]

JD: Wagner was hugely influenced by Meyerbeer...
BH: I’ve never sung any Wagner – it's a different voice type – but I can certainly see how Meyerbeer’s writing would have influenced Wagner's, especially in the ballet. The music uses very progressive tonalities for the time and it’s great writing. It’s what probably gave Wagner the idea to make the orchestra an equal part of the opera, as opposed to just accompanying the singers - I think Meyerbeer’s already started to do that here. The ballet is almost the most famous thing in the opera, not just because it’s great, but also because it’s shocking to the audience – and not just because it’s nuns behaving badly. I don't think the audience was used to hearing music that was so much part of telling the story. It’s doing much more than setting the mood. There are lots of little solos between instruments that I haven’t heard in operas written before that time. I can see how Meyerbeer influenced Wagner in that way.

JD: Some people suggest that Meyerbeer is too "kitsch" to be convincing today...
BH: If you want to be that way about it, you can – because there are some silly moments. But if you're a Wagner person I think it’s hard to look down your nose too much at anyone else, because the way the drama moves - slow and laboured - that’s part of the style you see in Wagner. And in general, you have to suspend disbelief in opera to enjoy it. I mean, look at L'Elisir! If you buy into Wagner being six hour long, then when you walk into the theatre you approach it from a different place - and I think if an audience doesn’t do that, then they’re not going to enjoy it.

Laurent Pelly has shrewedly set the audience up for this. Act 1 is set in a tavern, everyone’s drinking and I think that’s an easy way to open the piece. In Act 2 we have the jousting and the tournament: the horses are red, yellow, green and blue, and the chorus singers supporting each horse are painted the same colour, even their arms and faces. I think he has a way of easing the audience into the opera and saying 'This is not what you might expect, but let us lead you there'... so by the end, people will really appreciate it. We’ve made some cuts that I think help to move things along. The French, for grand opera, wanted a long evening in the theatre – they went along for that! It might be a little far for modern audiences to go there right away, but I think we’re going to give it a good shot. 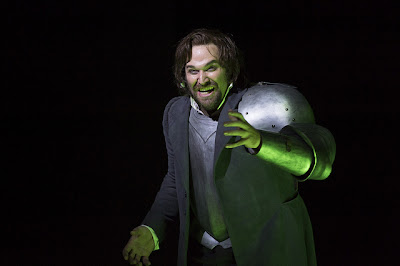 JD: Yout high tenor role is something particularly characteristic of French opera?
BH: Yes. I would say that Berlioz, Meyerbeer, Auber, etc, were writing for a specific kind of tenor voice – it’s a very different style from the Italian and it involves another approach to the high notes. Italians often throw in a high note out of the blue and I think it was written in that way so that if a tenor had that note he could put it in, and if he didn’t - and probably most of them didn’t! - you could just go on without it and unless people knew the music well, it wouldn’t strike them as funny. Here, though, there’s no way not to do the high notes and that’s what makes it really tricky. Being a tenor who sings this repertoire, I know that if I’m not feeling 95 per cent, the note’s just not going to come out! Rossini wrote Guillaume Tell in a similar fashion. The term at the time was 'heroic tenor', because though it was high it’s still very visceral.

Meyerbeer and these guys were writing for a specific kind of singer; those tenors were just starting to sing the high notes in their full chest voice right before this was written. Some of them still would go into the voix mixte. That wouldn’t work today: the theatres are too big and the orchestras are too loud for those sounds to be heard.

When they first sent [the score] to me I wasn’t sure I wanted to do it. Three years down the line you think hopefully your vocal progress will have continued to grow, but even though I could sing it at the time, I wasn’t comfortable enough about saying 'OK let’s do the title role in this opera at Covent Garden'. It’s been three years that this has been looming over my head! Now that I’m here, thank goodness I feel in the best shape I can be in. Coming from Les Troyens I feel I have the confidence and a kind of support and relationship with the audience here in London. I think we’re going to present something they’ll look forward to. I feel strongly about the piece, I’m excited aboutit and through the rehearsals I've felt I’m in a good place.

JD: Well, if you guys can't pull this off, then nobody can.
BH: I think that’s probably true!