Lesley Garrett to play the spy who sang to Hitler 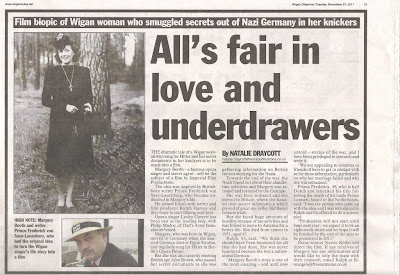 We interrupt the seasonal festivities to bring you news of a film in production based upon the extraordinary story of Margery Booth. An opera singer from Wigan, Booth became a spy during World War II and apparently sang to Hitler while state secrets were hidden in her knickers. Imperial Film Productions is developing the project with screenwriter Ralph Harvey, director Xavier Koller and, in the leading role, the one and only Lesley Garrett. The cast is also to include Udo Kier as Hitler.

More information about Margery Booth: The Spy in the Eagle's Nest can be found at www.margerybooth.com. Interested co-producers are urged to get in touch via the website to share the bringing of this fascinating story to the screen.


Margery Booth – The Opera Singer who spied on Hitler
It was her beautiful mezzo-soprano singing that melted the heart of one of the most evil men in history.  From humble beginnings in Wigan, Margery Booth, by sheer determination and armed with the magical gift of a magnificent singing voice, rose to be one of the top opera stars of Europe.
Courted by Ernst Ströhm, a wealthy business man and heir to a brewery fortune, Margery succumbed and eventually married him.  Although the union was initially successful, it ultimately proved to be a disaster and after the war in Europe ended Margery eventually divorced him.
Through her husband’s contacts in high society in Germany she rose to the top, and her highly acclaimed performances drew the attention of none other than the Führer himself, Adolf Hitler, who on one occasion personally delivered 200 red roses wrapped in a swastika flag and, totally enamoured of her, continued to ogle her throughout her performances from his private box.
Margery had, however, been recruited by MI6 whilst MI9 had also recruited John Brown, a former but now disillusioned member of Mosley’s infamous Fascist Blackshirts, and through the SOE arranged for him to be captured on the Normandy beaches so that he could work as a spy in a PoW camp.
As a guest in Hitler’s Wolf’s Lair, Margery rubbed shoulders with the top ranking Nazi hierarchy and, now totally trusted by Hitler, she was allowed to visit PoW camps where she not only sang but was able to contact John Brown and collect secrets for passing on.
Margery was suspected at one stage by the SS who moved in to search her, but John thrust some secret plans down her dress when they weren’t looking.  They escaped their search unscathed, but henceforth she was forever known as Margery the “Knicker Spy”.
In the closing days of the war she was arrested again but escaped during an Allied bombing raid just as she was about to be tortured, eventually reaching the American lines.  Then nearly shot, but fortunately it was her accent which miraculously saved her as an American soldier recognised it, having had been in Lancashire before the war.
Margery Booth’s story is one of the most amazing – and until now untold – stories of the war, and I have been privileged to research and write it for Imperial Film Productions and now on IMDb as Margery Booth: The Spy in the Eagle’s Nest.
This then is her story.