I interrupt my Nile-side G&T after a day of basking by the pool intensive work on my novel to bring you the news that Daniil Trifonov, 21-year-old winner of the Tchaikovsky Competition and general piano marvel of the best kind, has been signed by DG. 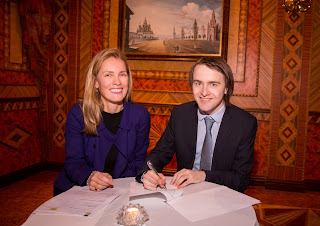 Yes! They got him. Whatever were they waiting for? Recording contracts are few and far between, these days, and it's good to see a good one going to someone who really deserves it.

His first album for the Yellow Label is to be recorded TODAY: ie, it's his Carnegie Hall debut recital. The programme is the same one he performed in London in early December: the Scriabin Sonata No.2, the Liszt B minor Sonata and the Chopin 24 Preludes. Hopefully there will be no intrusive of the Fon by the Phone at the climax of the Liszt, though - unlike that memorable evening at the QEH. So if you're in NY and going to hear him, please remember: Trifonov...Try.Phone.Off.
Posted by Jessica at 4:29 pm