I've enjoyed taking a trip down an operatic memory lane for Sinfini, plus talking to a range of celebs about their first experiences of opera and what got them hooked - among them ballerina Zenaida Yanowsky, actor Henry Goodman and comedian Rainer Hersch. Read the whole thing here: http://sinfinimusic.com/uk/features/2013/02/my-first-opera-curtain-up/

What follows is a further ramble on the topic... 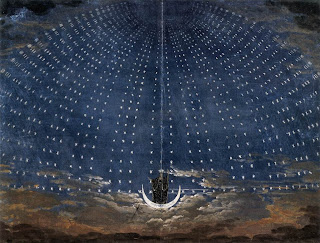 Thinking back, I owe my whole opera thing to my parents, who never talked down to me about music when I was a kid. They seemed to know how to encourage an enthusiasm without piling on undue pressure and when I picked up that Magic Flute box (tempted by the picture: left) and wanted to know what was in it, my mum showed me how to follow the translated text as if it was the most natural thing in the world (it was the classic Klemperer recording, in German, without dialogue). It was good of them to put up with my unfortunate singalongaluciapopp tendencies, too.


I’m not surprised they bought me an alternative. This was easier: just one LP, in English, much of it positively designed for singing along. It was The Little Sweep by Benjamin Britten: the story of a group of children and their nanny who rescue a small boy chimney sweep from his abusive employer. It was easy to follow and impossible to forget. Nobody ever seemed to perform it, though. At the time, I had no idea there could be anything sinister in a song about a boy in a bath and I still find myself humming that syncopated, swingy waltz melody now and then. I’ve never once seen this opera live. A footnote: one of the child singers on that recording turned up in my year at university and we used to have a whale of a time playing violin and piano music together (he’d swapped the voice for the fiddle long before). I enjoyed the notion that I’d cut my musical teeth by inadvertently listening to my duo partner singing.


I fell for Eugene Onegin on the car radio, but seeing it in the theatre aged about ten (starring a young soprano named Kiri Somethingorother) left me colder than I'd hoped it would. It was all a bit static, it was hard to hear the words and I couldn't work out why on earth Tatyana fell for Onegin in any case, as he wasn't exactly an appealing kind of chap.

Eventually live performance did enchant me – but not as you might expect. It was comedy, courtesy of English National Opera. The gods in Offenbach’s Orpheus in the Underworld perching on their clouds; Lesley Garrett stripping off as Adele in Johann Strauss’s Die Fledermaus; and above all, the sight of my father reduced to complete screeching, weeping helplessness over the nuns in drag in Rossini’s Count Ory. This could only happen in the theatre. And when it happened, there was no point resisting.

Interesting to see that while a lot of my interviewees cite Mozart and Puccini as their ways in to opera, Ed Gardner thinks those aren't such a good place to start. He plumps straight for Shostakovich and Janacek.
Posted by Jessica at 8:55 am