If you've been following my Twitter or Facebook posts this autumn you'll know that for a while my life was taken over by Beethoven. BBC Music Magazine asked me to do a 'Building a Library' feature about the 'Hammerklavier' Sonata and I discovered there were more than 50 to hear, recorded over a period of some 70 years, and these including only recordings that are currently in print and available in the catalogue. Before long it seemed like the most natural thing in the world to be listening to one of the greatest piano works ever written seven times a day.

It's been an extraordinarily instructive experience and if you've never tried doing anything like this, whether professionally or just for fun, I recommend it (it's also a lot easier to do it now if you subscribe to a well-stocked streaming service). I've done plenty in the past, but this was different. This was Beethoven's biggest and most ambitious sonata and everyone will read something different into it, none of it insignificant. The question is, how do those performing and recording it view it and what do they do to bring it to us? 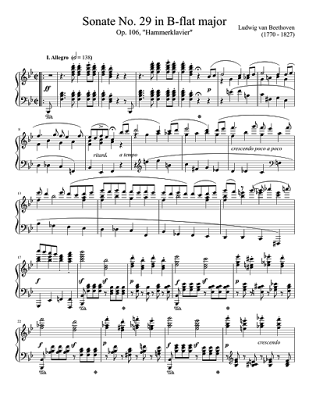 Two major problems were crystallising by the end of Day 2. First of all, have you ever heard someone say of the 'Hammerklavier' "I admire it, of course, but I don't love it...". I've heard this so many times that I've come to the conclusion it's just something that people think they're meant to say about the piece. What's not to love? Love it? I adore it!

What's not to love, possibly, is that it is so bloody difficult to play. There's that first movement metronome mark, minim=138. Can you imagine how many excuses people come up with to justify not even attempting it? Blimey, guv - let's trust and revere Beethoven, but not if it doesn't suit us... Have a think about the background harmonic rhythm in the first movement, then wonder why it soon seems draggy if it doesn't go at at least a good lickety-split. Czerny said that it simply takes "assiduous practice". But even harder is to sustain the tension in the long adagio, and then have enough energy left to whirl your way up the mountain of the nearest thing Beethoven wrote to a grosse Fuge for piano.

The second problem is that all too often I felt we weren't listening to Beethoven. We were listening to our attitude to Beethoven. Playing that is reverential, or that wraps every note in cotton wool because it's sacrosanct, or that just plays faithfully what's on the page without presuming to add one jot of personality. Playing that is terribly, terribly nice. The 'Hammerklavier' is many things, but nice it ain't. I can forgive anyone for being intimidated by it, but not for bowing and scraping to it as they play. By the end of Day 4 I wanted nothing more or less than a recording that would make me feel I was listening to Beethoven himself at the piano, the dragon awaking.

BBC Music Magazine asks for the format of a) background to the work, b) one overall winner, c) three runners-up, d) one to avoid. I expected it to be much more difficult to chose the top recording, but it was startlingly easy. The runners-up were much harder, as the number of recordings that are really excellent, by pianists alive or dead, is enormous. The list of "ones to avoid" could also, sadly, have been huge, so I decided to pick a recording by someone who is safely dead and can't be upset.

Really, though, I do have to do a bit of bowing and scraping too: I absolutely take off my hat to anybody who can play the 'Hammerklavier' at all, let alone plumb its depths and bring it to life.

So who's the winner? You'll have to buy the January issue of BBC Music Magazine to read the full article, but I can give you a few hammerklaviclues:

-- He is American and very much alive
-- He is not playing a modern piano
-- His dad would have been extremely proud.

You can get the magazine here. Enjoy.

It's Christmas! Please feel free to support JDCMB with a donation here...
Posted by Jessica at 11:24 am