Some personal recommendations for literaromusical gifts this Christmas - though please note, this is a personal selection so there may be quite a few others that I've missed. Listed here in no particular order. Enjoy.

Being Wagner: the Triumph of the Will
by Simon Callow
William Collins
What made Wagner into Wagner? What drove him? Who was he, really, and what fuelled that gigantic ego - without which, let's face it, he wouldn't have been able to write such humongously ambitious music-dramas? Simon Callow, who wrote and performed a one-man Wagner show in the composer's bicentenary year of 2013, here dives into the agonies and the ecstasies of what it must have been like to be the great man. Putting aside the title's side-swipe at Leni Riefensthal and the 1936 Olympics, the book is a suitably lavish read, stuffed full of fabulous wordy, over-the-top descriptions, which you have to just sit back and enjoy. 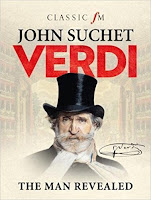 Verdi: the Man Revealed
by John Suchet
Elliot & Thompson
And the other great opera composer is here too. Hot on the heels of his volumes on Mozart, Beethoven and Johann Strauss, Suchet turns his attention to the life and prickly personality of Giuseppe Verdi, aka The Bear of Busseto. The dramas onstage are so intense that we sometimes forget that for their creator there was plenty off-stage as well, some of it desperately tragic (he lost his young wife and two children in the space of two years) - and that despite the status he achieved as national hero, Verdi tended to cover his own tracks and keep himself to himself. Suchet brings this elusive, deeply private individual to life - as much as anybody has ever been able to.

Year of Wonder
by Clemency Burton Hill
Headline Home
Presenter and broadcaster Clemency Burton Hill is one of our finest and most eloquent advocates for classical music in the wider world, and the fast-rising popularity of this book is testimony to her communicative gifts. The personal tragedies that spurred her into writing it have played a part, but so has the simple and excellent concept: one piece of music to listen to for every day of the year. And it's not all basic, obvious repertoire, either - there's plenty to discover, a good representation of composers who are women, a thousand-year timespan and friendly but never patronising contextualisation. Applause aplenty.

When the World Stopped to Listen: Van Cliburn's Cold War Triumph and its Aftermath
by Stuart Isacoff
Bantam Books Inc
A book about Van Cliburn? Wait a few decades and along come two almost at once. Isacoff's detailed and beautifully written volume arrived this year hot on the heels of Nigel Cliff's very readable but more journalistic Moscow Nights, which came out in autumn 2016. Isacoff traces the forces that shaped - and later destroyed - the great American pianist, symbol of the Cold War as he triumphed at the Tchaikovsky Competition in Moscow in 1958, with their facets political, musical and personal: the KGB, the smothering mothering (he speculates as to whether Rildia Bee Cliburn was not just "the wind that filled his sails" but also "the albatross that sank him"), and the consuming force of musical genius itself.

Gender, Subjectivity and Cultural Work: The Classical Music Profession
by Christina Scharff
Routledge Research in Gender and Society
A thorough, elegant, academic exploration of what it's like to work in the classical music field today, looking at the effects of turning an art into a business or indeed, a saleable commodity, the persistence of racial and gender inequalities and the nature of entrepreneurship in the profession. This needed writing, to put it mildly, and it needs reading, absorbing and acting-upon, too. But I have to recommend it as an e-book because the hardback is, sorry to say, priced at £105, which is perhaps a little optimistic. 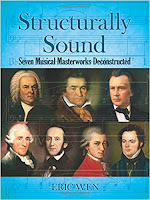 Structurally Sound: Seven Musical Masterworks Deconstructed
by Eric Wen
Dover Books
Schenkerian analysis fans, this is for you. Schenker sceptics, this is for you too. If you'll permit me a quick rant, Schenkerian analysis is being much maligned by a generation put off by the idea that he's old-fashioned, that he deals with dead white tonal composers (like, er, Mozart and Beethoven) and by, frankly, appalling teaching that distorts what he's all about. But two people have convinced me that Schenker is fascinating and fertile ground through which to discover the inner workings of the greatest music. One is Murray Perahia. The other is the author of this book, Eric Wen, who is currently a professor at the Juilliard School in New York. While others might leave you lost in the forest, he steers the safari truck through examples from Schubert, Haydn, Mendelssohn, Bach, Brahms, Mozart and Beethoven with a sort of virtuoso clarity and an infectious, unquenchable enthusiasm. (I use some principles of Schenker in my occasional creative writing workshops - it works rather well for books too.)

Jonas Kaufmann: In Conversation
by Thomas Voigt
W&N
An essential stocking-filler for the Kaufmaniac in your life, now available in English translation for the first time. Authorised biography, yes, but that's the way the cookie crumbles.


If you enjoy JDCMB, please consider supporting it with a small donation at GoFundMe. Thank you!