When I was working on Ghost Variations, one of the most rewarding - and moving - discoveries was the music of Frederick Septimus Kelly (1881-1916): Australian composer, pupil of Donald Francis Tovey, Olympic rowing gold medallist of 1908. He was tragically killed in the Battle of the Somme, having survived the horrors of Gallipoli. Jelly d'Arányi, our violinist heroine, was in love with him and kept his picture on her piano for the rest of her life. There's not much evidence that he returned her feelings, beyond the enjoyment of making music together - but nevertheless, he wrote her a substantial violin sonata on his way back from Gallipoli, which was unearthed and recorded for the first time by Australian violinist Chris Latham less than a decade ago. (You can hear Kelly's most famous work, the beautiful Elegy in Memoriam Rupert Brooke, in The Ghosts of War, the d'Arányi-themed concert I'm presenting for the Oxford Philharmonic on 1 June in Oxford Town Hall, which also includes Bartók's Concerto for Orchestra and, of course, the Schumann Violin Concerto).

The other day I had an email from the pianist Alex Wilson, with the heartening news that he has unearthed more unknown Kelly music, this time for piano solo, and is making a recording. He's crowdfunding it. I've asked him to tell us more. And do please support his efforts in bringing this rewarding music to light - you can contribute here. The campaign is live only until Thursday 7 March.

JD: Alex, how did you first come across FS Kelly and his music?

AW: I have always been fascinated by the music of composers who fall outside of the mainstream musical canon – a passion that led me to researching the music of the forgotten composers of World War One.  I discovered and performed music by Ernest Farrar, Cecil Coles and George Butterworth in a 5-year concert series – entitled ‘The Banks of Green Willow’ – and it was this exploration that led me to the piano music of the British/Australian composer Frederick Septimus Kelly (‘Sep’), one of the few wartime composers who wrote extensively for solo piano. I managed to unearth a few published pieces at the British Library that I performed in concerts back in 2014, and the success of these works led me to want to explore further.

How would you describe his music, for someone who’s never heard it before? What appeals to you most about it? 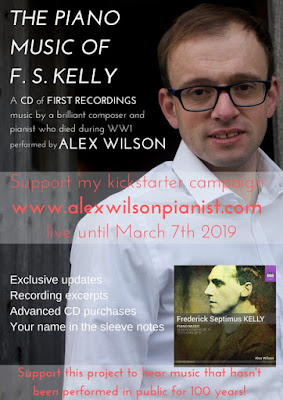 Sep’s music is so appealing to me because it is unlike the other music being written by his contemporaries in Britain.  He studied at the Hochkonservatorium in Frankfurtand as a result was influenced by both the late romanticism of mainland Europe and the pastoral, folk influenced style of his British colleagues, creating a unique sound world packed full of contrasting influences that it is really fascinating to try and make sense of – shifting from restrained hymn tunes to Chopin-esque romanticism and enigmatic harmonic languages reminiscent of Scriabin.

This music is full of youthful exuberance, unashamedly unrefined at times and covering a full range of emotions. His music is enigmatic, hard to categorise, but is still very accessible, and has proven to be popular every time I have performed it.

Why have you decided to record these piano works? Tell us something more about them.

This recording will be the first time the ’24 Monographs’ and ’12 Studies’ have been recorded in their entirety, with many works in the collections unperformed in 100 years.  The process of learning music for which I have literally no other point of reference as to how to perform, read and interpret has been fascinating.  There is no standard interpretation to fall back on, I essentially have a blank canvas on which to make my mark.

The Monographs and Studies were written over a number of years, started before the war in 1913 and continued during the war years until his death at the Somme in 1916.  Sep was revising and editing the music during active service, preparing it for publishing after the war.  It is unclear how close he was to completing this task when he lost his life, though one can assume that the revisions were largely completed as he had already performed a number of the works in concerts during the war period.  Stylistically the music ranges from romantic simplicity to harmonic ambiguity, and the Monographs cover all the major and minor keys, which naturally leads to comparisons with the Chopin Preludes.

Many of the pieces have only recently come to light. Please tell us how this happened, and why? Where have they been and how were they found?

Much of Sep’s original music is held in archives at the National Library of Australia. It remained in its manuscript form until 2005 when the Marshall-Hall Trust (an organisation devoted to publishing and distributing music by Australian composers) and editors Bruce Steele and Richard Divall created editions of the piano music.  On discovering the existence of further piano music by Sep I was able to obtain the sheet music from Kelly expert Chris Latham, the director of the Australian organisation ‘The Flowers of War’ – an organisation set up to promote the Australian contribution to the First World War.

His most famous work until now has been the Elegy in Memoriam Rupert Brooke - incredibly beautiful piece and one that pays tribute to a close friend. Can you tell us anything more about Kelly and the social circles he moved in?
Sep was a polymath; a young man who turned his head to various disciplines with skill and ‘thereupon decided to be a great composer’ after reading ‘Psychology and Life’s Ideals’ by Professor Hamer.  He performed with the greatest musicians of the day, including as part of a well-renowned trio with cellist Pablo Casals and violinist Jelly D’Aranyi – a woman who loved him deeply, for whom he wrote the Gallipoli violin sonata and who kept his photo on her piano for the rest of her life.
As a naval officer in World War One Sep joined the famous ‘Latin Club’ – a group of learned officers that included poet Rupert Brooke, composer William Denis Browne and Arthur (Ock) Asquith, the son of the Prime Minister. Sep was also a talented rower, winning gold medal at the 1908 London Olympics with the men’s 8s – before immediately giving it up and returning to performance and composition once again!

What do you think his significance is? (And what could it have been, had he lived longer?)
Kelly died at the age of 35, an age at which he was fully trained as a musician but had only just begun to refine his music, combining the many influences on his composition into a cohesive and individual musical voice.  Chris Latham suggests that ‘if Ralph Vaughan Williams had also died at the age of 35, their musical output would be an almost exact match in quality and quantity, but with Kelly writing more piano works, and Vaughan Williams writing more chamber works.’ Vaughan Williams grew into one of Britain’s most successful and loved composers, and one can only imagine that Kelly might have developed in a similar way.

Why are you crowdfunding the recording? What do you think the pros and cons of crowdfunding are? Is it something you’d recommend that other musicians try?

Funding from official sources is harder than ever to secure, with more musicians seeking funds from ever dwindling resources.  Crowdfunding has proven to be the perfect solution to this problem, and has been a wonderful way to bring my project to the attention of as many people as possible.  Directly as result of publicising this campaign I have connected with groups as diverse as Sep’s relatives, his old rowing club, wartime history enthusiasts and individual supporters from across the world.

Crowdfunding requires a LOT of hard work – I have spent months sending emails, writing articles, creating various recordings and radio appearances, all of which takes precious time away from the practice room in the months building up to a recording of some very difficult music!  However, I now feel like I know my subject much better than before, I have learnt immeasurably from my backers and the stories they have told me, and I am happy to have ‘sold’ a number of my CDs before the music has even been recorded!

For those considering crowdfunding, I’d say GO FOR IT, just don’t expect to have much time for anything else!