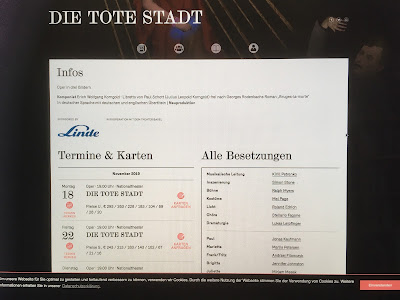 So, here we go. Jonas Kaufmann is singing the role of Paul in Korngold's Die tote Stadt at the Bavarian State Opera, starting on 18 November. And Kirill Petrenko is conducting, and Marlis Petersen is Marietta and if the announcement on Twitter hadn't been accompanied by a slightly worrying cartoon, I'd have fallen off the proverbial chair. One has of course been hoping for years that Kaufmann might do this. (One might even have mentioned such a hope when interviewing him five years ago, just in case - if he was already thinking about it by then, the cards were not revealed.) But gosh, I hope I'm not dreaming.

This video introducing the production suggests that director Simon Stone could well do it proud. (And indeed - update - a Die tote Stadt fan on Twitter tells me he has attended Stone's production in Basel and that it was "the best I've ever seen".) "We must go through the dark times so that we can see the light again," Stone says. "That's what's so great about the piece." Kaufmann meanwhile points out that the work contains just about everything that happened in opera between 1850 and 1950, which makes it "pretty difficult".

This opera, with its extended dream sequence, has in the past been an occasional magnet for 'dirctoritis': I've never quite recovered from witnessing Olaf Bär having to sing the Pierrot Tanzlied dressed in a black basque, angel wings and high heels. It's a work with a lot of heart and a lot of heartbreak; it carries a strong message about love and loss that was all too pertinent in the wake of World War I when the opera was premiered. That was, I'm convinced, one reason for its extreme popularity in the inter-war years - though its generous, atmospheric score and powerhouse roles for the lead singers might just explain something too.

Speaking of dreams, yesterday I logged on to the Deutsche Oper Berlin site to see if they were doing their hugely successful production of Korngold's Das Wunder der Heliane again, and it suggested to me that they were, in late April and early May, and I even checked T's calendar to see if he'd be free to go and see any of the performances together, and he wasn't. Then I checked back later - only to find it had completely disappeared. Dream sequence again (or just last year's website)? At least that production is due out on DVD in May. Pre-ordering is available, even if tickets are not.

Meanwhile in the US, the whole of the Bard Festival is built around Korngold this summer. Not least among the treats on offer will be the US staged premiere of Das Wunder der Heliane, conducted by the marvellous Leon Botstein. The festival also contains a concert performance of Die tote Stadt, a rare performance of the Piano Concerto for Left Hand, the Piano Quintet, the Symphony in F sharp, the Passover Psalm and much, much more. Music by Korngold's contemporaries, peers and mentors sets the context, spanning the worlds from Heliane to Hollywood with much in between.

Korngold now has what he has needed the most: top-level international advocacy. With Leon Botstein at Bard, Kaufmann, Petersen and Petrenko in Munich and Christoph Loy in charge of Heliane in Berlin, there's no doubt about the take-up, the appeal and the power. But there's only one thing missing: a real presence in the UK's opera world. One staged production of Die tote Stadt has come to Covent Garden, ever, many years ago. And that was that - which is frankly nuts. Perhaps Korngold is perceived as too European for one lot of Brits and too American for the others. It's time this changed. Thxbi >books plane to Munich<.