My report from my trip to the Korngold and his World festival at Bard Summerscape is now up at The Arts Desk, so here is a taster and a few more photos. 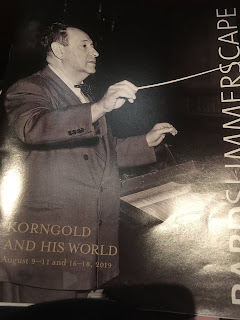 There could be no greater gift to any festival director than Erich Wolfgang Korngold. Where the exploration of his life, times and contemporaries are concerned, this composer is a veritable Spaghetti Junction for different strands of genre, development and fates. 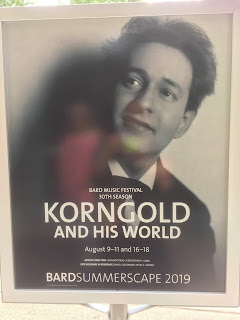 One of the most remarkable child prodigy composers in history, Korngold was the son of the music critic Julius Korngold. He studied with Zemlinsky (on Mahler’s advice) and enjoyed a meteoric rise to fame; his opera Die tote Stadt, premiered when he was 20, was a smash hit in the 1920s. Desperation to escape his father’s monstrous control-freakery also led him to work for some years in operetta.

With the Nazis’ rise to power he was fortunate, being Jewish, to move to Hollywood; he later credited Warner Brothers with saving his life and those of his family. He wrote relatively few film scores, but won two Oscars and was largely responsible for creating the sound that was long considered typical “film music” - the truth, of course, is not that Korngold sounds like film music, but that film music sounds like Korngold. In 1950, though, he attempted a comeback in Vienna, only to find that not only was his presence an unwelcome reminder of a shameful past era, but that his style was considered an anachronism.

He died aged only 60 in Hollywood, believing himself forgotten. In the past few decades, changing times and evolving attitudes have allowed his distinctive voice with its emotional and melodic largesse to be fully appreciated on its own terms - often for the first time.

Mix together the child prodigy years, the melting pot of influences; the splices of the serious and the ‘light’; the fading 19thcentury and horrifying development of the 20th; and the worlds of Mahler’s Vienna, 1940s Hollywood and shattered post-war Europe. There’s enough material to keep any festival going for probably a year...