I'm seriously behind here on all the summer activities. I've been to the wonderful Tuscan music festival Incontri in Terra di Siena and Bard Summerscape's 'Korngold and his World' and a few Proms, but have so many stories and experiences to "process" that I've not written any designated blogposts about them yet. You can read my review of Incontri here (though you will probably need a subscription to do so): https://theartsdesk.com/classical-music/theartsdesk-incontri-terra-di-siena-galloping-concertos-and-stravinsky-starlight

Anyway, here's the power-trio of Errollyn Wallen, Elim Chan and Catriona Morison who lit up the Royal Albert Hall at last night's Prom (my report for The Arts Desk): https://theartsdesk.com/classical-music/prom-39-morison-bbcnow-chan-review-night-inspiring-firsts 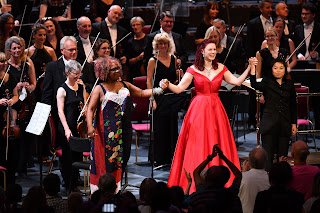 Taster:
A clever programme, a vivid premiere, a Proms debut for an exciting young conductor and the first appearance there by Catriona Morison since she won the 2017 Cardiff Singer of the World: all this provided grist to the mill for a sold-out Prom that was more than the sum of its impressive parts.

Elim Chan, who won the Donatella Flick Conducting Competition (the first woman to do so) in 2014, was on the BBC National Orchestra of Wales’s podium for pieces themed around the sea and pictures. The 33-year-old conductor from Hong Kong is a tiny, pleasingly charismatic figure – offering ideas that were not only sizable but often inspiring, even in repertoire that otherwise could sometimes seem too well worn for its own good.

Romanticism was the musical land that historical performance forgot, at least until recently. Designated researchers have been delving into real 19th-century styles of late, and if you think it has nothing to do with rigid rhythm, you’re right. What’s emerging instead is the sort of flexible and intense characterisation that Chan brought to Mendelssohn’s Overture ‘The Hebrides’. This was long-lined musical thinking, the softest moments replete with a hushed glow, sometimes slowing to a rapt stillness, and the vigorous episodes ratcheted up the tempo, balancing them out...