Should Strads be played?

One of the best-preserved Stradivarius violins in existence, the 'Lady Blunt' of 1721, is about to come up for auction. The auction house Tarisio has announced that the violin will be included in their online sale on 20 June. It's currently owned by the Nippon Music Foundation of Japan. All proceeds will go to the Nippon Foundation's Northeastern Japan Earthquake and Tsunami Relief Fund. This violin, named after one of its former owners, Lady Anne Blunt, who was Lord Byron's granddaughter, was bought by the NMF in 2008 for over $10m.
The press release quotes Christopher Reuning of Reuning & Son Violins in Boston, praising the instrument's exceptional nature: “Rarely does a Stradivarius of this quality in such pristine condition and with such significant historical provenance come up for sale. It still shows the tool-marks and brushstrokes of Stradivari.” Jason Price, director of Tarisio, says that the instrument is the violin "equivalent of da Vinci's Mona Lisa or Michelangelo's David."
If you have some spare millions sitting about and you won't already have spent them at Sotheby's on the Mahler 3rd first edition, the Mendelssohn watercolour or the nude pics of Britten and Pears, there could be worse purchases than this to consider.
As a pleasant side-effect, you could enable a great violinist to play a great instrument: in the list of illustrious owners of this violin, the names of any actual musicians are conspicuous by their absence. On the other hand - is that why the instrument is as well preserved as it is? Very probably, yes. The less wear and tear there is from playing an instrument, the more you can tell about the original craftsmanship that went into its making. After some 300 years, we're still trying to understand the secret magic of Antonio Stradivari  The new owner of the 'Lady Blunt' will need to weigh up the pros and cons of sound versus legacy.
Personally, I believe passionately that great violins should be played by great violinists; it is painful to see a Strad hanging in a glass case, the voice for which it was created silenced apparently forever. But clearly it's a debate that has two sides. Currently there's an amazing exhibition of musical instruments at the Horniman Museum in south-east London and I had a very interesting chat with one of its curators, Bradley Strauchan, just before it opened in March. It’s amazing how much you can learn from a 19th-century French horn, she told me.

Side by side in the exhibition, 'The Art of Harmony', sit two instruments once owned by Giovanni Puzzi. A lynchpin musical impresario in London in the Victorian era, he was also the Paganini of the horn, easily able to transcend the unfortunate Italian slang meaning of his name: “stinky”. His horns are reunited here probably for the first time since his death in 1876. One belongs to the Horniman, the other to the Victoria and Albert Museum.
In the bell of the latter instrument, lavish decoration in green lacquer has worn away exactly at the spots on which Puzzi placed his hand to shape the pitch of his notes. This horn has a tale to tell of its owner’s technique (we can even learn that he was right-handed), his distinguished and wealthy status (such decoration didn't come cheap) and the precious place the instrument held in his family history. The musician’s grandson gave it to the V&A in 1926; nobody had played it but Puzzi himself.

The horns in the Horniman are typical of the fascinating and exquisitely made instruments on show here. We have three years to beat a path to Forest Hill to see them, for this relatively small museum is thinking big. When the V&A’s musical instrument galleries were closed last year, an outcry followed among musicians, music-lovers and all admirers of instruments as historic objets d’art. This was, after all, the first publicly displayed collection of its kind in the country and remained one of the most prized. So the arrival in south-east London of 35 items from the V&A, on extended loan, represents a welcome venture to keep them in the public eye.
The V&A’s instruments provide an intriguing counterpoint to the Horniman's own, which were chosen by Frederick Horniman himself with utterly different aims. The juxtaposition highlights the contrast in mission between the two very Victorian gentlemen responsible for building up the collections. And, situated in the south London hills not far from the Crystal Palace, the museum – Horniman’s former home ­– was within a stone’s throw of one of the most important shopping grounds for instrument collectors, who flocked to its Great Exhibition of 1851 and bought up whatever they could. Horniman, though, accumulated the bulk of his collections – musical instruments and well beyond – during his international peregrinations as a wealthy tea merchant.
“In his whole collection, the emphasis was on eclecticism,” says Strauchen. Horniman was an obsessive collector of artefacts from around the world and especially of natural history; the museum is also home to a quantity of collected butterflies and a magnificent stuffed walrus. “When it first opened, the museum was about entertainment, spectacle and fun -- the grounds would be open, there’d be brass bands, firework displays and balloons ascending. 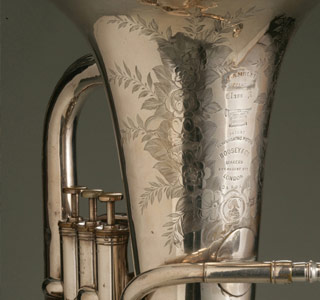 “Horniman was a Quaker,” she adds, “and very much in keeping with his Quaker ethos he felt a great responsibility to share his material fortune with others and provide the community with access to these things that they might not otherwise be able to see. For him, the Victorian didactic element, the desire to teach, the desire to share, was almost a moral imperative. The musical instruments in his collection, from all over the world, show his interest in music’s anthropological element, focusing on how they were used by musicians and what the social role of music was.”
Carl Engel, on the other hand, was employed by the V&A to build their own collection of instruments with an emphasis on design and craftsmanship. Engel, a German-born pioneer of organology (the study of musical instruments), was the perfect choice for the job. “He had a wonderful eye,” says Strauchen. “The V&A was set up expressly to help British designers and manufacturers to compete on an international basis, and the instrument collection was no exception. Here, it’s as if the two collections and their different purposes have been brought into dialogue with each other.”
The highlights are plentiful. Besides Puzzi’s horns, there is a chance to see Rossini’s oboe; Renaissance viols with exquisitely carved scrolls; an octagonal recorder carved out of ivory; long-abandoned models of instrument such as the viola d’amore and the baryton. Intricately decorated harpsichords and an exquisite oboe bell from 17th-century Holland bear witness to the aesthetic value that was placed on creations of that time. And there is a Stradivarius violin, made in 1699 and part of the V&A’s collection since 1937. It's the first time, says Strauchen, that the Horniman has had a Strad under its roof.
Plenty of violinists would be itching to get hold of that Strad. But it and its fellow exhibits are there for a good reason: leaving them untouched, says Strauchen, is the only way we can continue to gather detailed information from them about how they were made and the techniques that were used to play them. Still, she can’t help seeing both viewpoints. “As a horn player myself, there would be nothing more tempting than to take Puzzi’s horn into a quiet room for a few hours and play it!” she admits. So far she has managed to resist.

What do you think? Let them be played, or leave them alone?
Posted by Jessica at 2:07 pm