My orchestra-in-law, minus Tomcat, has been busy ploughing through recording sessions involving 30 national anthems a day, specially arranged for next year's Olympic Games by Philip Sheppard. The Telegraph has a fun interview with him on the topic (they say he looks like Nick Clegg...but that probably has more to do with the Telegraph than with Philip, to judge from the photo). The whole thing puts me in mind of one of Tomcat's favourite Misspent Youth In Denmark stories...

As a younger Tomkitten, JDCMB's right-hand violinist lived in the land of Forbrydelsen for five years: his first orchestral job was with the Aarhus Symphony Orchestra. In 1982, with a little splinter band that specialised in Viennese waltzes and the like, he went on tour to Greenland to celebrate the 1000th anniversary of Eric the Red. This was a very big deal in Greenland: the Queen of Denmark was going and the national anthem had to be played. The library apparently contained some wonderful old books of the things from times gone by, so one day the orchestra in rehearsal amused itself by playing through some theme tunes of nations that no longer exist, but might still have cats named after them. 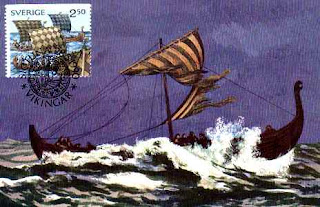 Unfortunately, come the concert, some kind of mix-up took place. The Queen arrived, everyone stood up and the band began to play...the Swedish national anthem. Her Majesty, who'd turned up in Greenland national costume complete with those enormous knitted socks, was decidedly not amused. The Pythonesque perplexment made the front of their local newspaper back home. Nobody ever really worked out what went wrong. Was it a conspiracy or a plain old c***-up? Nearly 30 years on, we are none the wiser.
Given this history, I can hardly blame him for not taking part in the sessions.
Posted by Jessica at 10:50 am