Our host site was down all yesterday and there's a lot to catch up on now. (Is the John Lewis warranty system also powered by Blogger? Today their system is down...as I know because our fridge is bust...)


First, the 'Classic Brits'. Whatever you think about their abandonment of those two little letters '-al', they had a handful of really good winners the other night. Best of all, Tasmin Little won the Critic's Award for her CD of the Elgar Violin Concerto (on Chandos). As you will know, dear readers, she also got a JDCMB Ginger Stripe Award for it last winter solstice. The disc is seriously, highly recommended. And since other awards went to Tony Pappano and Alison Balsom, things can't be quite so dreadful and doom-laden without those two little letters as many would have us think.

Next, James MacMillan's new chamber opera, Clemency. Fascinating to hear this so soon after the Berlioz Damnation of Faust, since it proves that less really can be more. A co-commission between the ROH, the Britten Sinfonia and Scottish Opera, it's spare, concentrated, highly characterised, and packs an extraordinary number of difficult questions into just 45 minutes of music. My review is in The Independent.


Over in Hungary, JDCMB favourite conductor Iván Fischer has given a warm endorsement to JDCMB other favourite conductor, Gábor Takács-Nagy, who has just been appointed principal guest conductor of the Budapest Festival Orchestra. The news comes via the lucky old Manchester Camerata, where Gabor takes over as principal conductor in the season ahead. Iván says: "There will be a very important change in the life of the BFO from next season onwards. Gábor Takács-Nagy, who was our former concert master, has been nominated Principal Guest Conductor of the orchestra. There are many conductors in the world who can get orchestras to play together but there are very few who can profoundly inspire. Gábor Takács-Nagy is one of them."

TODAY there's a live cinecast from The Met of Die Walkure starring Jonas Kaufmann as Siegmund. Coming soon to a cinema near you, but if you can't get in there are a few 'encore' showings tomorrow and even Monday. Oh, and it also stars Deborah Voigt as Brunnhilde, Bryn Terfel as Wotan and Eva-Maria Westbroek (aka Anna Nicole) as Sieglinde. Playbill Arts has 20 Questions with Jonas Kaufmann, in which our tenor says rather charmingly that "every composer has weak und strong points". Intermezzo disapproves of his admission that he likes Dire Straits. 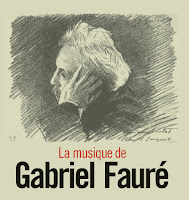 Faure fans who play the piano will be very glad to see Roy Howat's spanking new Urtext edition of Glorious Gabriel's Beautiful Barcarolles, all 13 of them, clearly and readably presented by Peters Edition and correcting all manner of mistakes, misreadings and misapprehensions that apparently crept into earlier publications. Roy's Faure editions have been arriving thick and fast over the past - well, probably a decade, come to think of it - and they're evidently a labour of love. This one may well tempt me back to the piano for a long-overdue wallow. Read more about it here.

And last but absolutely not least, my interview with the lovely South African soprano Pumeza Matshikiza was in The Independent yesterday. Pumeza grew up in the townships of the Cape Town area in the last decade of apartheid. Next week she'll be singing at the Wigmore Hall in a showcase concert of the Classical Opera Company, and will be doing a duet with white South African soprano Sarah-Jane Brandon. That wouldn't have been possible in South Africa a couple of decades ago. Go hear them.