The Budapest Festival Orchestra, appealing on every level

Woke up to news today that someone in Japan has invented a way to make violin strings out of spider webs. These are said to give "a soft and profound timbre" compared to traditional metal or gut strings. They're also supposed to be super-strong. More here from the BBC - including a sample of the sound.

The violin sounds I was listening to last night, though, would take a lot of beating. The Budapest Festival Orchestra and Ivan Fischer were joined (at the Royal Festival Hall's Shell Classic International Series) by Renaud Capucon (right) in an ear-whirling, ceiling-raising account of a work that is rarely performed live because it's too damned difficult: Lalo's Symphonie Espagnole. This piece is to Paganini what a triple chocolate muffin is to a plain choc-chip job. You can't live with a violinist and not know it, but otherwise it's played so infrequently that even some eager concert-goers I met in the hall had never heard of it and wanted to know if Lalo is still alive and which part of Spain he came from. (Background here.)

Capucon is a diminutive figure armed with the solidity and presence of a premier-league footballer, a focused and dispassionate performance style a la Heifetz, a gigantic, scarlet tone and a Guarneri del Gesu that used to belong to his mentor, Isaac Stern. The opening notes were a bit wild, but in a way that was a relief: it means he's human. Thereafter nothing could have shaken his security. Fischer's sophisticated accompanying let the soloist shine out in this Olympian marathon of a concerto, while Lalo's rhythms bounced beneath, passed from group to group like soft rubber balls.

Rimsky-Korsakov's Scheherazade, under Fischer's super-charged baton, rose up as far more than a piece of 19th-century exoticism: this was musical storytelling at its most compelling, the second movement almost visible as a filmic battle scene for which no image could match the atmosphere of sound; and you could almost feel the spray of the storm in the finale as Sinbad's wrecked ship shudders towards the ocean bed. Fischer placed the harp at the front, opposite the leader (the eloquent Violetta Eckhardt), so that the solo moments, together with the BFO's unquakable clarinet and oboe, became almost a concertante group within the great romantic orchestra. 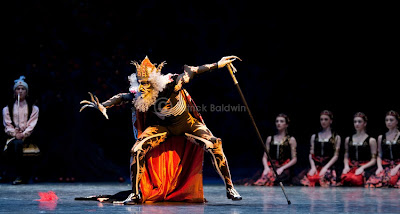 Details and articulation were wrought with narrative significance, the tonal palette a panorama of aural richness. The BFO's string tone does, when required, produce that heady, extraordinary, deep-dug, sock-it-to-em, Hungarian smoked paprika tone - but the key point is that it's reserved for the moments that need it, controlled by a Fischer who looked for all the world like Fokine's Kastschei from The Firebird (right - the Royal Ballet, photo by Patrick Baldwin), all magic fingers and broad, low, sweeping stance. Everything is thought through, then - yet the spontaneity of this orchestra's performance never suffers. The BFO breathes as one; they enter the flow (a phenomenon described by their fellow Hungarian, the philosopher Mihaly Czikszentmihaly) and fly together. If every orchestral concert were to be as vivid, alive and truly artistic as this, I'd be at one, voluntarily, every single night.

The BFO is not, however, an entirely happy place at present, and the presence of Brahms's Tragic Overture at the start of the programme felt like ominous commentary, even if it was not intended that way. The orchestra played it as if it were a matter of life and death. And it may be so. Funding cutbacks in Hungary are hitting the orchestra hard; at present, or so I'm told, they don't even know what their budget will be next season. I hope to bring you more details of their situation soon, but if you loved the concert as much as I did and you want to contribute to their continuation, you can help them by joining the Friends of the Budapest Festival Orchestra - there is a British Friends group and also an American one. In the UK contact: british.friends.bfo@gmail.com. The Hungarian government would have to be stark raving mad to let this orchestra go to the wall, but as things stand, anything could happen, so the BFO's international activities are becoming more vital than ever. If you love them, help them!
Posted by Jessica at 9:36 am