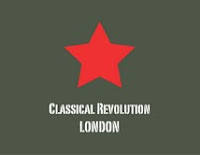 Classical Revolution, which started around six years ago in San Francisco and now has some 30 'chapters' across the US, Canada and Europe, is taking off in London at last. Simon Hewitt Jones is at the helm and the first event was last night at The Red Hedgehog in Highgate. There's another chance to sample the magic on Tuesday 27 March, 7pm, at The Green Carnation, Soho.

I asked Simon to tell us all about grass-roots chamber music...

JD: What IS 'Classical Revolution'? How did the idea begin and why do you think it is spreading so quickly? 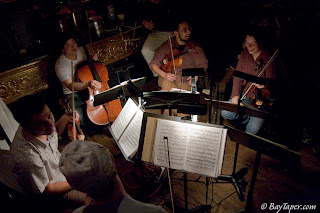 SHJ: Classical Revolution began with some graduates of the San Francisco Conservatory of Music saying 'We want a different performance environment to play chamber music'. They took over a bar every Monday night for a 'Classical Jam Session'. Word spread rapidly, and soon they were doing several performances a week. It started off as an occasional event, but it soon became a fixture of the San Francisco music scene. People just liked the environment, the ambience, and how it allowed people to enjoy classical music in a different way. As more musicians passed through San Francisco and experienced the 'Classical Revolution' vibe, word spread, and before long it had started up in over 25 cities worldwide.

I first came across Classical Revolution when I was studying in Berlin, and later I played at several events in the USA. It was one of those 'wow' moments, where I just thought 'I don't know quite what's going on here, but I know I've been looking for something like this for ages'. Each event and location is different, and so are the models - it depends on who is organising it, what the local audience wants, and how that fits with the venue and the type of performers.

In London, we're starting out with a headline act, the fantastic cellist Richard Harwood (EMI Classics), and several featured artists including top performers like David Worswick (violinist from the London Symphony Orchestra), The Frolick (legendary 'Baroque-and-Roll' band), and a wide range of professionals from chamber music ensembles and major orchestras. In the local (north, west, and south London) versions of Classical Revolution, there will also be an 'Open Mic', where people can try out new pieces in front of a friendly audience, and new acts can get a foothold in the classical scene and start to build up a following. The central London (Soho) event will be a more formal 'Presentation Night'; a kind of showcase.

At the end of each evening, after the show has ended, there will be an informal 'ChamberJam', where musicians play chamber music that they know with people with whom they don't usually perform. It will be an exciting melting pot, where new collaborators and old friends can get together and play.


JD: What is different about Classical Revolution, compared to other projects that take music out of conventional concert halls - eg, Deutsche Grammophon's Yellow Lounge, the Southbank's Harmonic Series, and The Rite of Spring in a car park?

SHJ: For a start, it's been around for the best part of six years, so we know the format. But also, it's independent. Musicians always know loads of other amazing musicians and are great natural 'connectors'. By being a fairly free network, not reliant on a big label or cultural organisation, we're giving musicians an opportunity to try out different types of collaborations in a easy, low cost way.

Plus, it's really focused on classical music first, and contemporary music second. But the biggest difference is probably the emphasis on classical chamber music, such as string quartets. You won't find big orchestral performances in the programming. It's all about the little groups, the individuals, the soloists and classical ensembles that make up the 'grass roots' of the classical music scene. It is providing an independent platform for classical 'indie' artists - somewhere to try out a new piece of repertoire in the open mic, or build up a fanbase, or launch a CD.

SHJ: The easy answer is 'everyone', but I think that's misleading. I think (my answer might be different after the first few shows!) we are aiming Classical Revolution London at two types of audience:

1) People who already love classical music but want to have a choice of environments to enjoy it in. Sometimes you're in the mood for a full-blown tails-and-bow-tie evening out with a major symphony orchestra playing in a major concert hall. Other nights you want a really intimate, low-key environment in which to experience a Beethoven String Quartet at close quarters. You get a very different experience if you're on a sofa in a small room with a glass of wine, rather than sitting amid a large audience in a big auditorium. Neither is the 'right' way of doing it; they're just different.

I'm not too worried about needing to reach out to new audiences - word of mouth will do that work if the event is good enough. But first we have to make sure we are presenting things in an exciting way, by tweaking the context and the presentation so that people who are new to it don't get scared off.

I've been saying this ever since I graduated from the Royal Academy of Music: if you meet the audience on their own terms by tweaking the context and the presentation of your work, then you can connect with them meaningfully, and ultimately take them to where you want them to be. With my own group, Fifth Quadrant, we have proved the point at countless festivals and installation performances; you use presentation techniques and popular music choices to engage the audiences and win their trust, and then offer them something more challenging. At that point, they are listening in a different way, and they trust you enough to take a chance on a new piece of music.

That's the way we create a new audience for classical music, and get rid of the stereotype that still exists in the world at large that classical is kind of 'elitist', 'stuffy' or 'dull'. Classical musicians know it's none of those things, but we have to meet people on their own terms first, before we can persuade them otherwise. Person by person, piece by piece, performance by performance. It takes a long time, but it's possible.

SHJ: We want to create a creative platform for musicians to perform great chamber music more frequently, without the traditional 2-5 year booking periods, in a setting that's very different to a typical concert hall. By creating an informal environment, we are opening the possibility to all sorts of unique interactions and amazing musical experiences that musicians and audiences just can't get anywhere else.

JD: How does it work financially?

SHJ: We'll start off with a basic box office split (90% straight to musicians, 10% to cover operating costs) and refine it from there. The most important thing for people to understand is that MUSICIANS COST MONEY. If money doesn't come out of ticket sales and sponsors' pockets, then it comes out of musicians' goodwill. But you can't eat goodwill, or use it to pay the rent. Somehow, musicians need to be paid - and paid properly.

Classical Revolution has a conference in Chicago next month basically to tackle this entire question. I expect lots of cultural differences here, and as the organisation is mostly based in the USA, it's going to be interesting to see how those ideas translate over into a British environment.

A final point on this - I'm thrilled that so many great musicians are getting involved and helping to make this happen in the first instance, and it's gratifying to know that the actual performers really understand the importance of initiatives like this to the whole ecosystem of classical music. But we can't trade on goodwill forever: the challenge is to make it sustainable.

JD: Why should we all get involved?

SHJ: Because there's nothing in the world quite like listening to a string quartet at close quarters, glass of wine in hand, on a sofa.