It's the big news in the classical music world: a new trade fair for the industry, to be held at the Gasteig in Munich at the end of May, organised by the same team that does WOMEX.

Classical:NEXT is not just about walking from stand to stand: there'll be conferences, discussions, a fantastic schedule of showcases both live and on video - from young artists to operatic productions - and of course there's a valuable chance to catch up with friends and colleagues from all over the world. It doesn't coincide with the Oktoberfest, in case you were wondering, but it so happens that I've been to that (if somewhat by accident...long story...) and all I can say is that if Classical:NEXT is even a fraction as well organised, then it's going to be something very special.

JDCMB won't have a stand as such, but I'll be there: I'm going to speak on a panel about "the future of music journalism" along with Oliver Condy, editor of BBC Music Magazine, and Carsten Dürer, editor of the German magazine Piano News.

More info, registration and everything you need to know here.

I've asked Jennifer Dautermann, Classical: NEXT's Project Director, some questions about why and how the event is being brought into being. It's all about synergy... 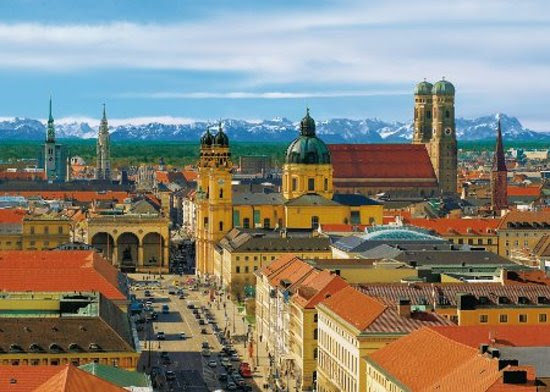 This photo of Munich is courtesy of TripAdvisor

Jess: What are the aims of Classical:NEXT and what do you hope it will achieve for the music industry?

Jennifer: Our aim is to gather all elements of the wide, mulitfarious world of classical together under one roof. All sectors (labels, distributors, publishers, presenters, managers, artists, journalists, etc.) all epochs (from early music to contemporary), all approaches (from traditional to experimental or genre-blending). These combined forces have boundless potential to create powerful synergy. Together, all these perspectives and specialities can become a force for positive energy and positive development for the sector as a whole as well as its individual parts. This first edition is just the start of that gradual process.

Jess: How did the idea come about? WOMEX has of course been a great success, but what has made the same organisation turn towards classical music?

Jennifer: The initiative goes back to CLASS - the association of classical independents in Germany. As a company that has concentrated on rich musical traditions from around the world, we naturally gravitated to their idea. It may sound like a paradox at first, but if you really love a tradition you not only have to preserve and honor it, you must also revitalize and perhaps even revolutionize it. That is our perspective at Piranha WOMEX.

Jess: Why should we all come to Classical:NEXT? What will distinguish it from any similar events that already exist?

Jennifer: There actually is no similar event. Classical:NEXT is the only event which actively welcomes all sectors, eras and approaches. All players, big and small. And, of course, we try and focus on what will be "next": New formats, new ideas, new methods, new talent, new interactions and inspirations.

Jess: Will any of the events be open to the general public?

Jennifer: Definitely. The evening showcase concerts on 1 June, the IMZ film programme and our partner programme "C:NEXT Level" in the Munich Clubs Bob Beaman and Harry Klein. And we have a heavy student discount on the whole programme. 2012 is just the first edition, a "beta" edition if you will. We hope to take the Classical:NEXT spirit out to the general public a little bit more every year with more events.

Jess: Why did you choose Munich as the best location?

Jennifer: Munich has a long and rich tradition in classical music which is, of course, very important.
There are many beautiful cities, but Munich's and the Gasteig's surroundings are ideal for a networking event and the city itself has been open and supportive.

Jess: What do you think will be the highlights of this first Classical:NEXT?

Jennifer: The scene is diverse and colourful and so are the participants and their individual tastes - thus I hesitate to identify highlights. The real strong point is that this diversity is finally gathering in one place. Delegates will have a unique opportunity to get to know people, scenes, approaches, and ideas which might be completely new for them.
Posted by Jessica at 7:58 am