Judith Weir's latest full-length opera is heading for Covent Garden, opening on 12 March, and it's the first opera ever to finish (as far as I'm aware) with the heroine winning the lottery. Emma Bell is in the leading role of Tina, conquering a number of different stratospheres (left, Emma atop "the shape"). I talked to them both about creating what Bregenz Festival director David Pountney called "an opera for an entirely normal audience". See my feature in today's Independent, here.


The Lyric Opera of Chicago has commissioned the young Peruvian composer Jimmy Lopez to write the work, which is scheduled for the 2015-16 season. Ann Patchett's novel describes a terrorist attack in a South American jungle in which a group of opera lovers, politicians and a singer, Roxanne Coss, are taken hostage: over the months, attackers and hostages form unexpected alliances. RENEE FLEMING, Lyric's creative consultant, chose the book as the perfect topic for the opera. The libretto is by playwright Nilo Cruz, the director is Stephen Wadworth and Sir Andrew Davis conducts. And Danni, who's much more than Glyndebourne's fabled Cleopatra, takes the lead as Roxanne. More here.

“It’s about terrorism on one level, but it’s also about what happens when people are forced to live together for a long time, and how art can raise their level of humanity as a group,” Fleming said. “Most of us crave a cathartic emotional experience when we’re at the theater, and I believe Bel Canto has the components to do that... I was struck by Jimmy Lopez's intelligence and the way he understands both the problems in bringing this piece to the stage, but also the possibilities that opera as a medium offers for illuminating a story. For example, the orchestra can accentuate the dramatic situation onstage, but it can also convey the underlying turmoil that one might not see. This is something that many composers miss and that Jimmy understands completely.”

3. JD TO SPEAK AT CLASSICAL:NEXT


The new classical music trade fair Classical:Next, taking place in Munich from 30 May to 1 June, has announced its initial line-up of events and speakers, and I am happy to report that JD is to be on a panel discussing the future of music journalism, along with BBC Music Magazine editor Oliver Condy and the editor of the German magazine PIANONews, Carsten Durer. Classical:Next is a sister production to WOMEX, and if that event is anything to go by, we want to be there. 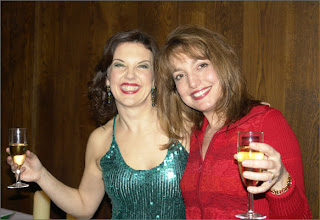 Tonight at the Anvil, Basingstoke, and tomorrow night at the Fairfield Halls, Croydon, the London Mozart Players and TASMIN LITTLE (left) give the world premiere of the complete Four World Seasons by ROXANNA PANUFNIK. Having had a sneak peek for Classical Music magazine, I reckon Vivaldi wouldn't know what's hit him. Rox writes:


"In early 2008, the violinist Tasmin Little rang me to ask whether I’d write a series of short pieces for her, accompanied by chamber orchestra. Considering a world where global concern for climate change and seismic shifts in international political landscapes affect us all, we decided to take Antonio Vivaldi’s much-loved 1725 Four Seasons and give the concept a 21st-century twist, creating an entirely new work with each season (lasting approximately 5 minutes) influenced by a country that has become culturally associated with it."  Spring in Japan, an Indian Summer, Autumn in Albania and a Tibetan Winter form the music in this celebration of music across the world, reflecting the many cultures that descend on London for the 2012 Olympic Games."

5. JUST FOR THE HECK OF IT, HERE'S DARCEY BUSSELL AS SYLVIA


Ahead of her time, Frederick Ashton's Sylvia was created for Margot Fonteyn in the 1950s. Diana's top nymph is not exactly your typical 1950s ideal housewife. I love the power, joy and freedom in Darcey Bussell's interpretation, filmed at the ROH in 2005. Girl Power if ever we saw it! Roberto Bolle is her lovestruck swain. Enjoy.