Fresh from the Gustav Mahler Conducting Competition in Bamberg 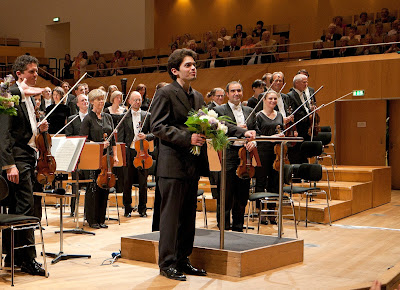 I've just been in Bamberg for a few days to listen to the finals of the Gustav Mahler Conducting Competition. Top prize went to Lahav Shani, a 24-year-old Israeli now living in Berlin - he is a Barenboim protege (and a bit of a lookalike), and clearly a young man on his way somewhere special. Above, he collects flowers and applause at the final concert. (photo: Peter Eberts) 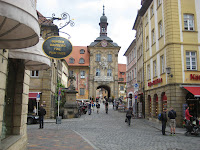 Having heard only the final round, in which each candidate had 40 minutes to rehearse the first movement of Mahler 1, I was nevertheless a little startled, personally, when the prize did not go to David Danzmayr from Austria, who is nine years older than Shani - an experienced conductor with a strong, humorous and appealing personality who evidently knows exactly what he's doing. 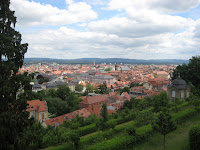 It's clear, though, that the jury's decision was based on the total impression that built up across four rounds and that they saw something in Shani that has the potential to grow, grow and keep on growing. Danzmayr won joint second prize with Tung-Chieh Chuang of Taiwan, who also had a strong body of support among the audience. 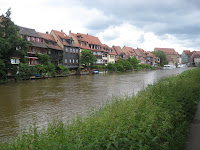 But when Shani took the podium for the winner's all-Mahler concert on Friday night, it was time to sit back and enjoy the music-making - and we did, for it flowed with warmth, sense and incipient magic. Will be writing it up in official capacity, so watch this space for links in due course. 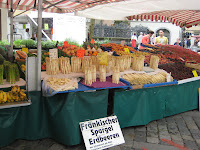 Bamberg is the sort of place which...well, just look at it. The whole town feels like it's made of gingerbread. Or it would if the local specialities were not in fact white spargel and smoked beer. The population is about 70,000  -- and apparently 10% of the citizens are subscribers to the world-class Bamberg Symphony Orchestra's concert series. (Imagine that statistic in London... but we can still dream.)

We were very happy to meet Mahler's granddaughter, Marina Mahler, who is patron of the competition. Here she is with some of the gifted youngsters who did not make the final, but who have distinguished themselves enormously by being there at all - the contest takes only 12 candidates out of more than 400 applications. (Here is the full list of candidates, with their biographies.) 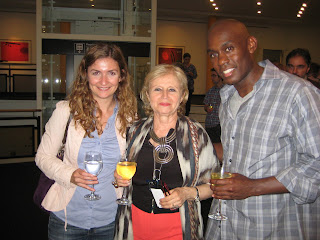 Marina Mahler (centre), with Zoi Tsokanou of Greece and Joseph Young of the USA... Zoi lives in Zurich and has been doing a good amount of opera. Joseph is based in Phoenix, Arizona, and has recently made debuts with the Colorado and Tucson symphony orchestras. 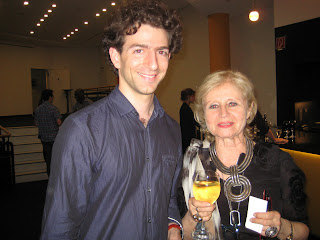 Fr Mahler again, with Gad Kadosh (France/Israel), who may have a UK debut before too long. He is about to move - next week - to Heidelberg to take up a "2nd kapellmeister" post at the opera house there. He and Zoi were two of the students I watched in the Bernard Haitink masterclasses in Lucerne last year. Was mightily impressed with them both.

I was less impressed on this occasion with the fact that no women were in the Bamberg final and there was only one on the jury - Frau Mahler herself. Complete list of jurors here. Jonathan Nott was unfortunately off sick.

Most amusing incident of the trip: at the final I was in the hall chatting to Gad Kadosh and Manuel Lopez-Gomez (of Venezuela) when someone from the audience came up and asked me for an autograph. This is the first time I've ever been mistaken for a conductor. It will probably be the last as well.
Posted by Jessica at 9:34 am