Hungarian Dances in Lakes and London 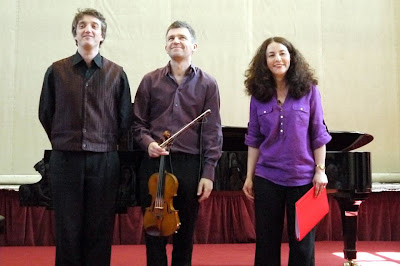 A final reminder that tonight is your chance to catch HUNGARIAN DANCES: THE CONCERT OF THE NOVEL at the St James Theatre Studio, 12 Palace Street, London SW1, at 8pm.

AND AN UPDATE: the thrill of the adrenaline rush...is this maybe why performers get hooked on performing? My piece for Culturekicks: http://www.culturekicks.co.uk/2013/06/04/in-praise-of-the-adrenaline-rush/

We are just back from the Ulverston International Music Festival in the South Lakeland, where we, um, we got a standing ovation...! Which was rather gratifying to say the least, especially as this was a morning coffee concert and by then it was coming up to lunchtime. Huge thanks to everyone at the festival for a day to remember. Above: Anthony Hewitt (who's artistic director of the festival), David Le Page and me, milking our moment of glory in the Coronation Hall... 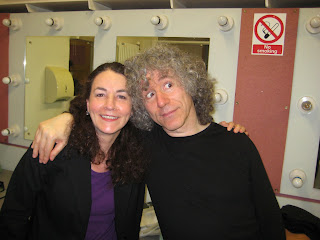 I also did a pre-concert talk with everybody's favourite cellist on Thursday night... He and pianist Ian Brown gave a sensational recital featuring, not least, the cello sonata by Frank Bridge, which is a work everybody ought to hear and marvel at, especially when it's played with such eloquence. An English Rachmaninov? Not far off. 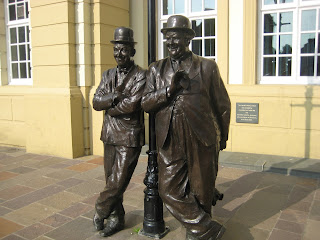 Ulverston was the birthplace of Stan Laurel, so look who's lurking just by the Coronation Hall doorway. Oddly enough, I nearly had the opportunity to say "Here's another fine mess you've got me into..." due to a strange incident at 1am the night before our concert... Suffice it to say that Gretel and I were in a huge flap, Tony's dad heroically ventured forth to save the day, and Dave slept through the whole thing.