A new play by Lewis Owens entitled Like a Chemist from Canada depicts Shostakovich's visit to Oxford to be awarded an honorary doctorate - and the clash of two very different worlds, each with its own strictures. It is premiered on 13 June at Sadler's Wells Baylis Studio, then is at the Royal Academy of Music, London, on 14 June and the Sheldonian Theatre, Oxford, on 3 July. I was intrigued, to put it mildly, and asked academic-turned-playwright Lewis Owens to tell us about it... 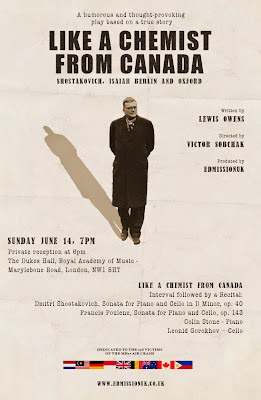 JD: Lewis, what first gave you the idea to write a play about Shostakovich's visit to Oxford?

LO: I published the documents surrounding the event ten years ago, but the idea of turning it into a play has always been festering away in my mind.

Firstly, because there is a wealth of material with which a dramatist can engage: not only do we have Isaiah Berlin's long and expressive letter on the visit but also many of the telegrams and letters sent and received by the Oxford Registry and Soviet Embassy in London. I felt that all of the personalities involved could be explored, developed further and essentially brought back to life. I was also struck by the idea of an honorary doctorate itself (having struggled through my own non-honorary one!). How were they decided and by whom? I was aware that Tchaikovsky had been awarded one by Cambridge in 1893 (along with Saint-Saens, Bruch, Grieg and Arrito Boito – this is also forthcoming project of mine!) so I was intrigued to explore the machinations behind Shostakovich's award and visit to Oxford.

I did ask Cambridge to award Shostakovich one posthumously in 2006, to celebrate the centenary of his birth, but unfortunately they declined (they do not award posthumous honorary degrees). Credit to Oxford, therefore, for recognising his talent and importance, particularly during the Cold War period, and credit more so to Shostakovich, perhaps, for actually coming!

JD: You've used a lot of original documents - can you tell us something about the process of turning them into actual drama?

LO:This has been one of the most difficult aspects for me, especially as my background is more of an orthodox 'academic'. It has also been a difficult balancing act between allowing the letters to speak for themselves but also having an audience in mind who wish to be challenged  yet entertained.
Naturally I have had to develop written text into spoken dialogue on many occasions, which has not always proved easy.

I am also very aware that some of those involved in the event are still alive, and therefore capturing their authentic voice and mannerisms was always something very much in my mind. I have sought advice on this from senior Oxford academics who knew personally figures like Berlin, Trevor-Roper and others as well as current family members, all of whom have been extremely helpful. I can't promise to have captured everything perfectly - this is a creative snapshot rather than a documentary -  but I have tried to show sensitivity to those involved as much as possible.

JD: You're looking very much at the clash of two contrasting worlds, each with its own structures and strictures - Oxford academia and Soviet Russia. Compare and contrast, please?

LO: I have attempted to make that clash quite evident, particularly in Act 1. The telegrams and correspondence show that the Oxford Registry became increasingly frustrated with a lack of response from the Soviet Embassy and needed to send the official ceremonial documents three times before they felt confident that Shostakovich was coming. I have tried to capture this most obviously in the figure of David Hawke (played by Patrick Farrimond) who read Oriental Studies at Lincoln College before entering the Registry, where he remained for the rest of his career. In the play he is very secure in the academic environment of Oxford but, when confronted with the suspicious and rather unhelpful nature of the Soviet Embassy, loses his poise and composure, regained only when he returns back to the safety of Oxford.

This theme of people being taken 'out of their comfort zone' is something I have tried to encapsulate. This is no more evident than in the figure of Shostakovich, of course, when he arrives in Oxford and attends the ceremony and also a soiree arranged in his honour. I think he actually enjoyed parts of the visit, though, and was keen to take the gown and robes back to Moscow with him as a memento (much to the consternation of his bodyguards, who saw it very much as a 'bourgeois' honour). There are some photos of him back in Moscow after the event, fully robed in the ceremonial attire! [see photos attached].

JD: How did Shostakovich get along with Sir Isaiah Berlin? And with Poulenc?

LO: He clearly had a strong respect for Isaiah Berlin, who was his host for the visit. Berlin of course spoke fluent Russian and was very sympathetic to the plight of artists under communist rule (1958 was also the time of the 'Zhivago affair' surrounding the role Berlin played in bringing Pasternak's manuscript out of Russia). Shostakovich stayed with Isaiah and Aline Berlin at Headington House during the visit and later wrote to Berlin (see letter below) asking for his assistance with the staging of his opera Katerina Ismailova at Covent Garden. There was clearly mutual respect.

I think there was also mutual respect with Poulenc, himself a recipient of an Honorary Doctorate and they certainly enjoyed each other's company. From talking to those present at the soiree, though, Poulenc seemed a little in awe of Shostakovich and certainly in Berlin's account of the event there was no doubt in his mind who was the more musically impressive.

JD: What part does music play in all of this?

LO: A large part. The play begins and ends with music. I decided quite early on that I did not want Shostakovich to have a spoken part in the play. Rather, his 'voice' would be represented by the piano. Therefore, there are snippets of his Prelude and Fugue in D Minor at particular points, which also serve to indicate passages of time. I have also staged a small part of the soiree (it was not practical to stage all the music) so we have songs of Poulenc and Shostakovich (sung by Clare McCaldin, playing the role of Margaret Ritchie) as well as more substantial parts of the Shostakovich D Minor Prelude and Fugue (played by Colin Stone). The music is integral to the play but it is by no means a musical. The music contained within is very subtle and, although very important and symbolic, should not be a distract from the dialogue or overall story.

JD: Do you think it's going to change the way we see Shostakovich - his personality and his music as well? And what else might we learn from it?

LO: SO much (too much?) has been written about apparent sub-texts' in Shostakovich's music. There is a reference to this in the play but it is certainly not my intention to contribute to this debate. Rather, I think it shows more about his personality: his nervousness and anxiety, which seemed only temporarily relieved whilst he was himself playing at the soiree. He clearly lived solely for his music and it is evident that it was quite simply an extension of his personality, in the way it was for so many of the other great composers.

I have also tried to pose some contemporary questions: how much has really changed, both academically and politically, since 1958 and how does it make us evaluate current events surrounding Russia? I don't prescribe any answers but I do hope several poignant questions are raised.

Letter from Shostakovich to Isaiah Berlin: 15 April 1963 (Reproduced with the kind permission of Irina Antonovna Shostakovich):

I was glad to receive your letter. I hope that your operation went well, and that you are well. I always recall my stay in Oxford with great joy. I remember your hospitality and your kindness with gratitude. The score and the piano score of my opera ‘Katerina Izmailova’(this was how I changed the title of ‘Lady MacBeth of Mtsensk’) will be available soon. I was a little late with the completion of my new version. At present I have finished it completely and in 10-20 days the score and the piano score will be printed in multiple copies. Covent Garden’s administration should request the score and as many piano scores as needed, all these will be dispatched immediately. To send a request please write to: Moscow, K 9, ulitsa Nezhdanovoi, Bureau of the Propaganda of the Soviet Music of the Musical Fund of the USSR. If it is not difficult for you, please pass this information on to Covent Garden. And while my letter is on its way to you, and whilst Covent Garden’s letter arrives in the Bureau of propaganda, the score and the pianos scores will be ready.Please pass my greetings on to your wife.