Barenboim calls to the world to help Syrian refugees

Daniel Barenboim, speaking to reporters ahead of conducting a concert by the West-Eastern Divan Orchestra at the United Nations in Geneva last night, called on the world to do more to help refugees from the Syrian civil war.
"Europe alone can't deal with (the) Syrian refugees...the rest of the world has to participate," he said. "The Arab world should also take Syrian refugees." 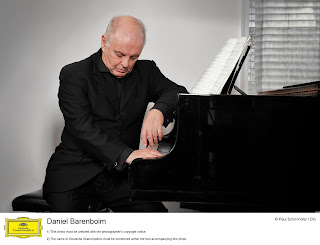 Millions have been displaced in Syria since the conflict began about four years ago. Two million have gone to Turkey, more than one million to Lebanon and 630,000 to Jordan, according to UN figures, while more than 700,000 have come to Europe.

Barenboim's own family came to Argentina as refugees from Russian pogroms against the Jewish community in the late 19th century. In Argentina today, he said, there are three Syrian communities, respectively Muslim, Christian and Jewish: "All of them would be happy to give a land to the refugees," he said.

Maestro Barenboim, who holds both Israeli and Palestinian passports, also spoke about the current intensification of violence in Israel and the Palestinian territories. "In Jerusalem the problem is really complex," he said. "The moment has come for the UN to put pressure on to solve the conflict."

At yesterday's Concert for the Understanding of Civilisation and Human Rights, given at the invitation of the UN Director General and the UN High Commissioner for Human Rights, Barenboim and the WEDO performed the last three Mozart symphonies for an audience which included the UN Ban Ki-Moon. The WEDO website says that broadcast details for the performance will soon be announced.

Barenboim was designated a United Nation Messenger for Peace in 2007.
Posted by Jessica at 7:50 am