Beatrice Rana: A Star is Born

Meet the 23-year-old pianist from Puglia who is sweeping to stardom. She's on the latest cover of PIANIST magazine (my interview with her is inside) and last night she took the RFH by storm in her concerto debut there, playing Prokofiev's Piano Concerto No.2 - one of the darkest and most emotionally daunting in the repertoire. 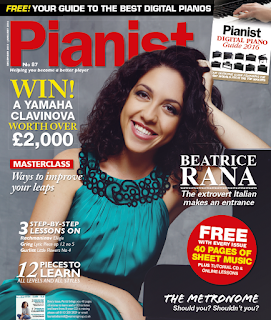 Beatrice met its challenges with seemingly effortless virtuosity. She caught an ideal mix of intense expression and mercurial modernism, rising cool-headed to the challenges of the giant cadenzas and the perpetuum mobile scherzo. Fine rhythm, grace, elegance and huge reserves of fire all had their place in this performance, which brought the house down and sparked a vivacious Bach encore (the Gigue from the B flat major Partita).

I was amazed, talking to her for the interview, that she was so young. She's mature beyond her years, ferociously intelligent and mentally well organised. She went to a high school in her native Lecce, Puglia, that specialised in science. Question: if you weren't a pianist, what would you be? Answer: Space Woman! I'd love to be an astronaut or an astrophysicist. Her parents are both pianists, her sister a cellist and her grandparents makers of that fabulous strong south Italian red wine that she remarks is "not for aperetif!" And she says her dog tends to leave the room if she's not playing well.

Last year she entered the Van Cliburn Competition because she wanted to see if she could "upgrade" her career. She duly downloaded silver medal and the audiences' hearts and now she has recorded the Prokofiev, along with Tchaikovsky 1, with Tony Pappano conducting, for Warner Classics. It's a stunner. After last night, I can only urge you to go and catch her if she comes to a hall near you.

Last night's concert was conducted by Susanna Mälkki, of whom more later on...
Posted by Jessica at 9:01 am