Robin Ticciati, the 28-year-old British conductor, has been announced as Glyndebourne Festival Opera's next music director, starting from January 2014. I'd have eaten my sole surviving hat if they'd picked anyone else. Glynditz is one big, delectable cake to take, and comes accompanied by champers. All jolly well deserved, too.

It seems just the other day that Nicholas Snowman, in his short tenure as general manager of Glyndebourne, announced the appointment of an unknown twentysomething Russian as music director. "Vladimir Jurowski? Who?" said everyone. Clever move - just look at him now. But that was ten years ago.

The big question now is: what will Vladimir do next? 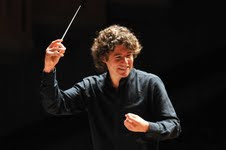 Of course you know all about Ticciati's new job already...I'm not going to start wittering on about "embargoes", Twitter or why we referred to Robin as XXXX for 18 1/2 hours. Instead, here are some vital statistics from the press release explaining how Robin, who's currently music director of the Scottish Chamber Orchestra and used to be music director of Glyndebourne's touring opera, will go bob bob bobbing along to the Sussex opera house.
David Pickard, General Director of Glyndebourne said: “I am delighted that Robin has accepted our invitation to become Glyndebourne’s Music Director from 2014. I can think of nobody more appropriate to continue Glyndebourne’s long tradition of artistic excellence and innovation.
None of us will forget the excitement when, as a 21-year-old assistant conductor on Die Zauberflöte in 2004, Robin Ticciati stood in the pit at Glyndebourne for the first time and conducted the overture. Those who were present at this rehearsal were in no doubt of his exceptional talent. Over the past seven years, we have been privileged to enjoy many thrilling performances from Robin, both as Music Director of Glyndebourne on Tour, and as a regular conductor at the Glyndebourne Festival.”
Robin Ticciati said: “I am honoured to have been offered this wonderful opportunity and I look forward to Glyndebourne becoming my operatic home. From my very first experience of Glyndebourne, I was overwhelmed with the unrivalled opportunities that the environment offered. Creating opera with such talented artistic teams and world-class musicians in an organisation that places great emphasis on detailed musical preparation is a genuine privilege.”
Vladimir Jurowski, Glyndebourne Music Director said: “I am relishing my time at Glyndebourne as Music Director (2000 – 2013) and am very proud of the body of artistic work that we have produced together to date. The unparalleled rehearsal opportunities and detailed preparation dedicated to every aspect of the organisation has allowed me to realise many of my artistic dreams.  I am delighted that in 2014 the enormously talented conductor Robin Ticciati will take over this role. I have every confidence that he will cherish, as I have, the opportunity to create opera in the unique environment that Glyndebourne provides.”
Posted by Jessica at 9:00 am