And the winner is...

Congratulations to STEPHEN LLEWELLYN, winner of the JDCMB 'Chacun a son gout' competition. Yes, bizarrely enough, that is indeed the same Stephen Llewellyn who was the proud champion of Miss Mussel's first #operaplot competition. Stephen, you will be the lucky recipient of the new CD by Joseph Calleja, 'The Maltese Tenor', which will be sent to you straight from the offices of Universal Classics.

The correct answers: 'Chacun a son gout' is featured prominently in Johann Strauss II's opera Die Fledermaus. And it is sung by Prince Orlofsky. I am impressed that everybody who entered the competition - and there were lots of you - got it right.

The prize draw took place last night in the concertmaster's dressing room at the Royal Albert Hall, just after the London Philharmonic had completed its 'Vladothon' all-Hungarian Prom, which involved Kodaly's Dances of Galanta, Bartok's Piano Concerto No.1 with Jean-Efflam Bavouzet as soloist, and to end, Liszt's Faust Symphony.

We asked the orchestra's one actual Hungarian violinist, Katalin Varnagy, to select the winner's name from the many entries that mingled in the violin case... You can see the very glam Kati talking about her Hungarian musical heritage in the Prom interval when the concert's televised on Thursday evening. 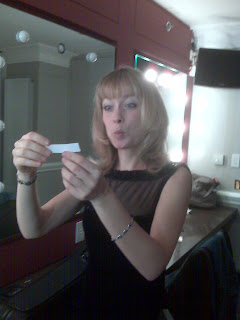 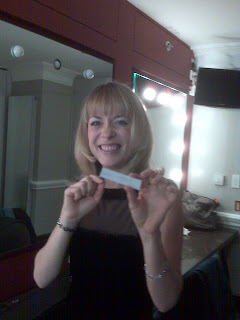 Then, since the occasion was also Tomcat's birthday and, besides, marked the 25th anniversary of him joining the LPO (odd, as he's only 21...) everyone came along for a drink, including the adorable and stupendous Mr Bavouzet... 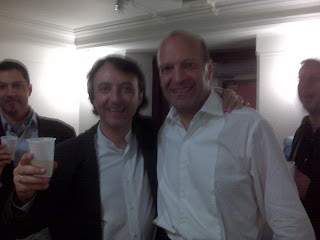 ...and also Vladimir Jurowski and concertmaster Pieter Schoemann (pictured below - l to r, Vladimir, Tomcat, Kati and Pieter). The flag is Hungarian - there's a green stripe at the bottom. 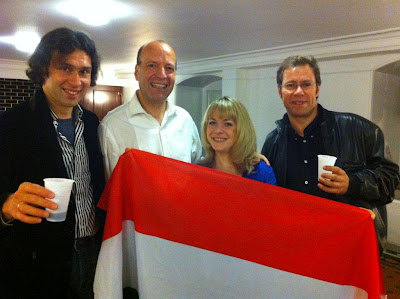 I'd just like to reassure any Hungarian Dances fans that the characters of Karina (semi-Hungarian) and Rohan (South African) were not actually based on Kati and Pieter. It's all pure coincidence, honest to goodness, guv. These things happen with books sometimes. Life imitates art. It does.

Quite a late night. Please excuse the JDCMB team while it adjourns to the kitchen for extra coffee....
Posted by Jessica at 9:55 am