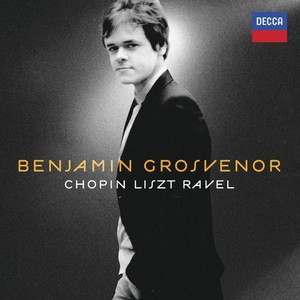 Benjamin Grosvenor's first CD for Decca is out on Monday. It consists of a Chopin selection, some unusual Liszt and Ravel's Gaspard de la nuit. And it's to die for.

Benjamin's 'Ondine' is the most tender, gorgeous and underwatery account imaginable; his Chopin Scherzi turn up all manner of unexpected, glittery-dark facets and deep-buried stores of gunpowder; the limpid Liszt and the Chopin nocturnes invite you to sink into their silky textures. The magic is partly a mixture of Benjamin's touch, his sensitivity and intelligence and his sheer intuition for how to point a detail, curl a phrase, finish the garnishing with flare; and partly it's the fact that he has a sonic imagination that is absolutely instinctual, way beyond his years, one that knocks the spots off many aspiring artists who are older than he is and have won prizes that he doesn't need. It's playing that can make you hold your breath, smile, laugh and cry, each within moments of the last. It's playing of which you might declare "Ah, they don't make 'em like this any more..." if the pianist in question weren't just 19 (and he was still 18 at the time of recording).

Are we talking about someone who could, if fate allows, in future reach even the level of a Zimerman or an Uchida? I don't know, but it's not impossible. Though of course he is nothing like either of them. He's already his own man, with a sound that speaks with a unique voice.

Here's Decca's preview. The black and white filming is apposite, as is Benjamin's backward glance at the end; these features echo the Golden Age influence in his approach, the inspiration of pianists from another era. Roll over, British tennis and its losers - let's start celebrating instead the fact that the next truly great artist of the piano might just be a lad from Southend-on-Sea.