Amazing what you can stumble across on Facebook. If I hadn't logged on just after Jonathan Dove posted a flier for his new opera Mansfield Park, which will be premiered next week. I might never have known he'd written it. What? Jonathan Dove has turned Jane Austen's Mansfield Park into an opera?!? Clearly this needed urgent attention, so I've written a feature, which is out today in The Independent. Read it here.


There was a little more in the original version about the doughty Heritage Opera and how this tiny and excellent enterprise went about raising the necessary dosh to commission a new work from one of the UK's best music-theatre composers. So here is the director's cut.


Plenty of new opera has graced the stages of London and Manchester this year, much of it controversial, cutting-edge and high profile. But off the beaten track, in the stately homes of northern England, a small and very plucky opera company has dared to think big in a completely different way. Heritage Opera, based in Staffordshire, is about to give the world premiere of an opera based on nothing less than Jane Austen’s Mansfield Park, written for it by one of Britain’s finest music-theatre composers, Jonathan Dove.

The intimate scale of the enterprise might have pleased Austen herself, who once referred to “The little bit (two inches wide) of ivory on which I work with so fine a brush...” Involving just ten singers and piano-duet accompaniment, the opera has been conceived specifically for performance in country houses, which has been Heritage Opera’s speciality since its founding in 2006 by its musical director, Chris Gill. The ‘theatre’ itself serves as the opera’s set.

Commissioning Dove was ambitious for such a small and still relatively new company: this audience-friendly musical creator has some extremely successful operas to his name and can probably pick and choose. His Flight, created for Glyndebourne in 1998, has been staged across three continents; his Pinocchio for Opera North was a more recent smash hit. Yet the encounter with Heritage Opera was serendipitous: it enabled Dove to fulfil a cherished dream.

“The idea for Mansfield Park goes back a long way,” says Dove. “When I first read it, more than 20 years ago, I remember hearing music and feeling that it wanted to become something. At that time there was another company that used to tour stately homes doing blockbuster opera repertoire with piano; it went through my mind at the time that that would be the perfect way of doing Mansfield Park
. I’ve never thought it would be right for a larger opera house.” 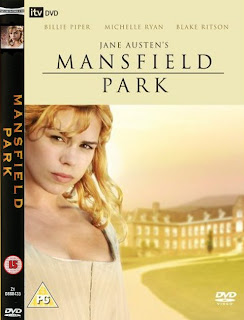 Austen fans will be familiar with the story of Fanny Price, a poor relation in a grand house, in love – at first unrequitedly – with the family’s second son, Edmund. The long-suffering girl watches helplessly as he is dazzled by the sophisticated Mary Crawford; scandal, heartbreak and stargazing all have their places in the tale before it reaches its quietly happy conclusion. Dove nails its appeal: “It’s just like Cinderella,” he says. His regular librettist, Alasdair Middleton, has boiled down the substantial book to its dramatic essence, framing each scene with a sung ‘chapter’ heading and retaining Austen’s words wherever possible.

Strange, perhaps, that Austen has been largely overlooked by opera composers until now; strange, too, that of all Austen’s books Mansfield Park could seem the least obvious choice for adaptation. Would Pride and Prejudice or Emma, more popular novels with more extrovert characters, not hold more appeal? Dove says that in fact the reverse is true.

“I heard music in Mansfield Park in a way I hadn’t with the others,” he says. “It’s the way Fanny Price is written. Elizabeth Bennett and Emma Woodhouse are delightful and fantastic characters, but I never felt there was anything that I needed to add to that. With Fanny, we sense her suffering, but she’s never explicit – she never says to Edmund ‘Stay away from Mary Crawford’. It’s what she’s not saying that provokes the music.”

He hasn’t attempted to create a pastiche of the musical style of Austen’s day: “The score doesn’t strictly behave like early 19th-century music, but I hope it suggests that era,” he says. “The accompaniment is for four hands at one piano, a medium that Austen would have heard often. I like the idea that while that the musical grammar might be unfamiliar to her, the vocabulary is something she’d recognise.”

Sarah Helsby Hughes, HO’s artistic director who also sings the role of Mary Crawford, has high praise for Dove’s musical characterisation. “The music for Fanny is gorgeous, extremely haunting and touching,” she says. “Mrs Norris is very cleverly done, with spiky writing that’s her to a T. And for the conversation between Mary and her brother Henry he’s created an urbane, almost jazzy, city-gloss idiom that’s different from any of the other characters’ music: it tells us that these are city slickers who’ve arrived in the country. The words of that conversation are lifted straight from the book – it really is Jane Austen.”

The cost it faced, £36,000, may seem relatively modest, but it’s still a substantial amount for a small company to raise from scratch. Help arrived in a grant from the Peter Moores Foundation; a healthy donation came from a private sponsor; but still, for three years HO collected doggedly via fundraising events and appeals at their other performances around the north of England. Responses ranged from fans popping in a few pounds to one enthusiast writing a cheque for £1000. “Our local audiences have responded like kings and given everything they could,” says Helsby Hughes.

And what will hardened Austen fans make of a Mansfield Park opera? Tim Bullamore, publisher of the Bath-based magazine Jane Austen’s Regency World, thinks it will be welcomed with open arms. “The ‘Janeites’, as Rudyard Kipling called them, are absolutely devoted,” he comments. “They’ll go round the world, they’ll go to conferences, they dress up – recently I saw 100 of them walking through Bath in regency costume. That’s especially popular with Americans – I think this opera should cross the Atlantic really well.” As an opera in its own right, he adds, Mansfield Park has great potential: “It has all the subjects you need in an opera: adultery, affairs, money...”

There, though, any resemblance to Anna Nicole ends. Austen’s Mansfield Park has a special sensibility (and perhaps sense, too) that enjoys an apparently timeless appeal. Dove’s version may start out on a piece of operatic ivory with its first stately homes tour. But I suspect this won’t be the last we hear of it.

Mansfield Park opens on 30 July and tours until 11 August. Full details at: http://www.heritageopera.co.uk/whatson.html
Posted by Jessica at 11:59 am