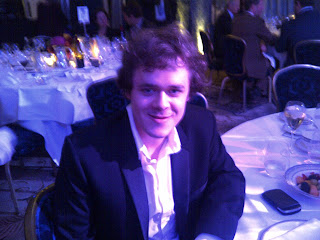 Quite a feast at the Dorchester yesterday for the Gramophone Awards.

First of all, it was Benjamin's big day [left]. Since the BBC has moved many of its TV operations, including the Breakfast news programme, to Salford - about 200 miles away from most of the action, eg. the government, a daft decision if ever there was one - he was up north at crack of dawn to appear there. Then whisked all the way back to London just in time to be catapulted onto live Radio 4, for which The World at One was able to cover the awards since the news of them was out early. Next, into the ballroom to accept two prizes, make a couple of speeches and play two party pieces [below], and receive the goodwill of the music industry, which was his by by bucketload. 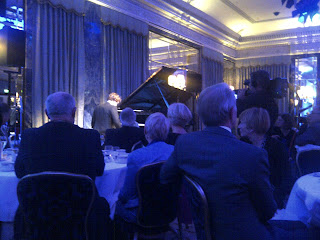 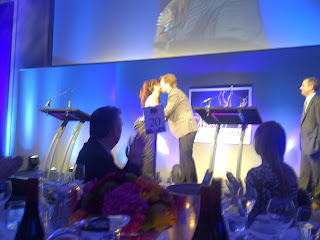 The indefatigable James Jolly more than lived up to his name as he presented the prizes, aided and abetted by Eric Whitacre and "Sopranielle" de Niese, as someone managed to dub her. Danni treated us to a performance of Lehar's 'Meine Lippen, sie küssen so heiß', over which our host quipped "I bet they do"... Live music too from the mesmerising violinist Patricia Kopatchinskaya, playing the Bartok Romanian Dances in authentic Romanian Gypsy style; and Granados from Leif Ove Andsnes, who was in town to play at the RFH and came in to collect the chamber music prize, awarded to him and Christian and Tanya Tetzlaff for their glorious  recording of Schumann trios. [Above, he collects his award from Danni.]

There were touching moments aplenty. Think of the filmed interview with Murray Perahia, who scooped the new Piano Prize, proving yet again why genuine musicianship cannot be trumped by anything, ever; or the turbo-charged voice of Joseph Calleja, scooping Artist of the Year. Most moving of all, though, Vaclav Talich's granddaughter came in to accept the historical recording award on his behalf: his Smetana Ma Vlast, given in concert in 1939 two months after the Wehrmacht marched into Prague and featuring a moment in which the audience spontaneously broke into singing the national anthem. There's no other moment like it on disc, said Rob Cowan. 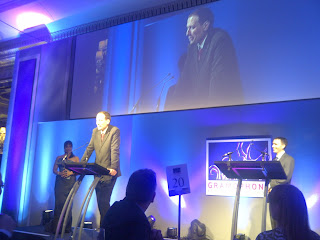 Priceless, too, was the announcement of Record of the Year, which went to the Baroque Vocal category for Schütz's Musikalische Exequien - from the Belgian choir Vox Luminis and its director Lionel Meunier. A towering figure (literally) with a blend of charm and modesty that captured everyone's hearts as he stood, overwhelmed, by the microphone [left], Lionel explained that the whole recording was organised in his kitchen and he could hardly believe he was going to go back to his choir the next day and say "We f***ing got Record of the Year!"

Plenty of time for chat, gossip and networking in between, natch: a chance to clink glasses with some and say "Better times ahead?" and others to say "Bravi", and others still to reflect on the growing parallels between two of our greatest tenors now, Calleja and Kaufmann (who pre-recorded a thank-you speech for the Fidelio recording with Abbado and Nina Stemme that took the opera prize) and, respectively, force-of-nature Pavarotti and deep-thinking, dark-toned Domingo.

Among my most interesting encounters was a discussion with a critic who'd come in from the pop culture world to see what it was all about. He was furious. Why? Because, he says, there's all this incredible music, yet it's somehow been sectioned off and the world at large never gets to hear it! The decision-makers in the British media don't include it as part of culture in general, and they should. It's been ghettoised. And not through any fault of its own - millions of people love it when they have the chance. Why keep it out of the mainstream with some cack-handed inverted snobbery that says the general public isn't capable of appreciating it?

One more Gramophone needle: here's the line-up of winners for the final group photo. 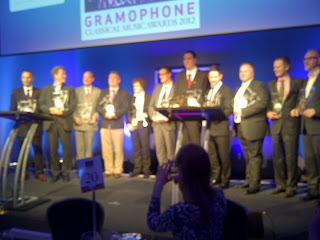 That's right, they're all blokes.

Violinist Isabelle Faust won the concerto category, to be fair-ish; Tanya Tetzlaff features in the chamber music, and Nina Stemme in Fidelio, but the latter scarcely got a mention while everyone was drooling over Jonas's speech and adulating Claudio Abbado who won the Lifetime Achievement award. The two women who collected awards did so on others' behalf: Talich's granddaughter and Perahia's wife.

Of course, there's a strong feeling that these awards are for musical achievement alone and gender balance shouldn't matter. In an ideal world, yes, fine. But this isn't one. Given the number of world-class female musicians on the circuit at present, how is it possible that only one-and-two-bits were among the winners of so many major awards?

I still have the feeling that to be fully recognised as a woman musician, you must work five times as hard as the men and look perfect as well. There's an unfortunate double-bind in the music industry: those charged with selling the artists via image doll up the women as sex symbols, only for a fair number of critics to succumb at once, consciously or otherwise, to the prejudice that "they're being sold on their looks, so they can't be any good". This isn't the way it ought to be.

I begrudge none of these marvellous male musicians their prizes: each and every one was fully deserved. Yet is it now time to introduce an alternative industry award, like the erstwhile-Orange Prize for Fiction, to boost the wider recognition of female classical musicians on the strength of their artistry, not their looks? Sad to say, but the answer is yes.