Somewhere in the house I still have a little lapel button bearing the words BRAVO SOLTI. It's a treasured souvenir from the great conductor's 80th birthday party, hosted by Decca at a Knightsbridge hotel in 1992, at which the company that had hosted his whole recording career presented him with the gift of a mountain bike. It was the only time I ever met him, and then only for the briefest of handshakes. More enduring is the memory of his music-making, notably the greatest Mahler 5 I've ever heard.

A couple of months ago I went up to St John's Wood to see Lady Solti and interviewed her in her husband's studio, surrounded by Grammys, Hungarian souvenirs and an array of memorabilia from his many decades at the top of the musical tree.

Here's the first part of the results: a major article in this week's JC, offering a taste of the celebratory events that are currently swinging into action and also, I hope, giving an intimate portrait of Sir Georg, his motivation and the way his philosophy of life was underpinned by his sense of his Hungarian Jewish identity. Read the whole thing here.

Solti was principal conductor of my OH's orchestra for several years and was received by its players with widely varying degrees of devotion, of lack of it. OH, being from a whole family of outsize central European personalities, adored him - Solti reminded him of his grandmother. Others didn't know how to cope with him. Some players nicknamed him "the screaming skull". And years later, one cellist persistently threatened to run over our cat (who, as you know, is named in Sir Georg's honour).

In the article Charles Kaye, Solti's right-hand man for around 20 years, talks about how Solti would wake up every morning wanting to be better at what he did and how he could inspire an entire orchestra to follow suit. OH encountered this in one form or another many times. During one rehearsal, he says, Solti turned on the first violins and shook the nearest music stand at them. "You must play this better!" he shouted, in that famous Hungarian accent. "I pay you money if you play it better!" OH put up his hand and said: "How much?" Solti was joking, of course - but it turned out that he liked being joked at in return.

UPDATE: And by special request, here is a personal tribute: 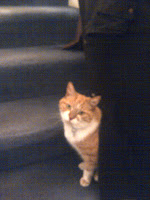