My interview with the man many consider today's greatest living composer was out in The Independent on Saturday. Read it here: http://www.independent.co.uk/arts-entertainment/classical/features/pierre-boulez-a-very-modern-maestro-8095947.html

I found the Maestro on excellent form, despite the eye operation. He may be 87, but the fire of his spirit burns as strong as ever. And I'm not sure I have ever met anyone else who is so searingly intelligent, creative and wise, all at the same time. I'll be doing a longer feature in a few months' time, for International Piano Magazine, which will also involve Pierre-Laurent Aimard, but for now, I'm putting below the "director's cut" of the Indy piece, which includes a few choice out-takes: the bit about Waiting for Godot might intrigue, and, of course, I love Boulez's attitude that you can't just see something is wrong and do nothing about it.

You can see the New York Philharmonic concert in the Armory on Medici TV until 2 October, here. (Remember, JDCMB readers get discounts on Medici subscription.) 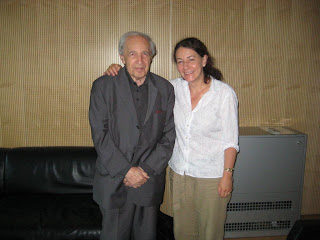 If Pierre Boulez is this energetic aged 87, imagine him at 30. Arriving at the Lucerne Festival, the composer, maestro and man of musical action is recovering from an eye operation; it obliged him to cancel his visit to the Proms, where the conductor Daniel Barenboim juxtaposed his works with the complete Beethoven symphonies. But he will not be kept back. “It forces me to stay quiet for an hour to let the eye rest,” he remarks. “But it is very difficult to stay quiet.”


Boulez remains the heart, spine and soul of musical modernism. Many consider him today’s greatest living composer. His music is demanding listening, but once you open your ears to it, it can reveal entire vistas of sonic imagination and spectral beauty. And he affirms that he would like listeners to find it beautiful. “Sometimes it’s difficult to go to this kind of beauty, which is different from other beauties,” he says, “but I want the music to bring you into a sphere where you don’t go generally.”

He is a figure wreathed in myth. Some suggest he is a “musical Stalinist” (a term used by the composer Pierre Schaeffer); others, notably his performers, praise him as the nicest person they know.

What’s certain is that he challenges everything, in music and in life, analysing issues with visionary exactitude. Besides, he is not a talker, but a do-er. “We don’t come to the world just to look at it and accept it,” he declares. In the 1950s he became notorious for the ferocity with which he called for the past to be swept away, seeking a blank slate for musical language to break with the preceding disasters of history.

“The ‘tabula rasa’ was something of my generation,” Boulez says. “Works like Stockhausen’s could not exist in the years 1933-45: this part of musical life was banned completely in Germany. It was the same in the USSR under Stalin. Therefore I could not adopt the Communist point of view, because we have seen that already and we know what it produces.

“It was not tabula rasa for pleasure. It was necessity, because this generation had, for us, failed to find something important. We did not want to prolong this kind of failure. We were radical in the sense that we at least tried to establish a new way of thinking. We did not succeed all the time, either – but it was important for us to begin from scratch.”

He was, moreover, a very angry young man kicking against the ultra-conservative musical establishment in his native France, where the music that galvanised him – Berg, Schoenberg, Bartók – remained unknown. Proving the point, it was down to Boulez himself to conduct the French stage premiere of Berg’s operatic masterpiece, Wozzeck, as late as 1963. He rejected France entirely until the prime minister Georges Pompidou used the promise of state funding for a new research institute for electronic music, IRCAM, to tempt him back from Germany, where a new internationalism in music was flourishing at Darmstadt.

Boulez’s early pronouncements – burn down opera houses, kill the Mona Lisa, and so on – have clung to his image, perhaps excessively. Not that he has truly mellowed. “I was not more radical than I am now,” he says, “but I was, I suppose, more frank. Now I see that sometimes you have to be less direct – and more effective. But when things are wrong, insufficient, or not exactly the way it should be, then you have to tell it. I did tell it, sometimes with paradox or provocation. I did not stay at this point, but people think generally of me as a man of 1950, not of today – and I have to accept that.” His attitude is much as ever: “Something unpleasant exists: simply that. And you cannot just stay in front of it without doing anything.”

Among Boulez’s more prophetic demands was an upheaval in traditional concert environments and formats. Four or five decades ago, the world was not ready to listen. Today, though, the increasing popularity of ‘classical club nights’ – spearheaded by, for example, Gabriel Prokofiev (grandson of Sergei) in London, Le Poisson Rouge in New York, and a series at the Lucerne Festival – echoes Boulez’s call for informal, communicative atmospheres between audience and performers. Still, he smiles when I mention a recent performance of Stravinsky’s The Rite of Spring in a south London car park.

“It has a double meaning,” he suggests. “It can be important, or it can be just a fashion moment. But I prefer a ‘fashion moment’ to doing nothing. Recently the New York Philharmonic has done, with concerts in the Armory, what I tried to do as its music director in the Seventies. I was not successful because the time was not right.”

In June the orchestra gave a performance in this unconventional venue on Park Avenue, including music by Boulez himself. It sold out and is streamed on the Internet until 2 October. He keeps dreaming: “Today people like to change the relationship between the sound and themselves. You could bring in improvised elements involving people’s reactions to the sound, like a fountain of music: sometimes good, sometimes not, but always with the freedom of creating.”

He is still composing, too. Currently he is trying to finish his Notations – 12 pieces for piano, some dating back to 1945, which he has been reworking for orchestra. Rumour has it that he would like to write an opera. It’s true, he says, but his plans were always beset by bad luck: intended collaborations with Jean Genet and Heiner Müller were each cut short by the author’s death. He would love to adapt Beckett’s Waiting for Godot: “The great novelty of Wagner,” says Boulez, “is that of creating a myth – the myth of Wotan, the myth of Siegmund – and finally the story becomes less important than the myth itself.” Wotan in The Ring is very real in dramatic terms, but in the Beckett, the myth is Godot, who never appears: “You find yourself questioning the myth, but you cannot discuss its qualities because there is nothing there! Therefore I was interested.”

Can we keep hoping he will tackle it – or would we be Waiting for Boulez? “If you can give me an elixir of long life,” Boulez twinkles. Still, I wouldn’t put it past him. This is a man who changed the world. Given a chance, he will not stop now.

Pierre Boulez gives a week of masterclasses at the Lucerne Festival from 1 September and conducts the Academy Orchestra on 7 September. www.lucernefestival.ch