Beethovenfest Bonn 1: The Death of Schumann 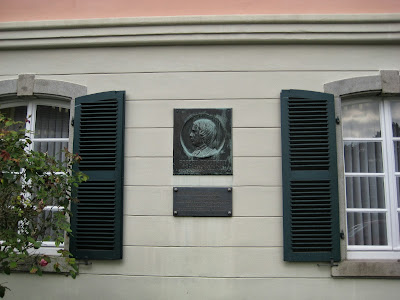 Yesterday I stood in the room where Schumann died.

It's a little room on the top floor, at the end of a long, old building in Endenich - a rather out-of-the-way and very leafy suburb of Bonn. This house was, in its time, a mental hospital; here Schumann spent the last two-and-a-half years of his life. He had one of the better chambers, with windows on two sides. Today only two rooms of the building form the Schumannhaus museum; downstairs is home to the town's music library and much of the upper floor, before you reach the Schumann space, is taken up by a largish area, bookshelf-lined, that hosts concerts.

In Schumann's room now stands a small piano that was once played by Liszt. Schumann was not allowed a piano there; one feels this instrument's presence is perhaps a rectification of rather an injustice. Atop it is a coverlet that belonged to Schumann's friend Joseph Joachim, the great violinist, embroidered by a number of Berlin ladies with his initials JJ and some musical motifs from his compositions. Photos of Schumann, Clara, Joachim and Brahms adorn the walls, while some of their letters and a copy of the manuscript of the Geistervariationen are on display in glass cases. Among them is Schumann's last (?) letter to Clara, dated about a year before he died. He saw Clara again - and for the last time - only when he was on his deathbed. 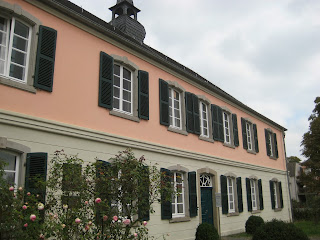 Schumann's last illness was pneumonia, brought on by starvation. The info in the museum says that he refused to eat, believing that (as a number of inmates apparently thought) the food was poisoned. I have read opinions elsewhere that suggested he may have been deliberately starving himself - a slow suicide over the fact that there was no way out. The writer Bettina von Arnim, who visited him earlier, had apparently found him in good health and longing to go home. Mental illness at that time was a terrible stigma. Perhaps, effectively, he was being "buried alive".

Here is an extract from the museum's information sheet:
Q: What type of therapy was administered at that time?
A: In those days, medications such as mood brighteners or drugs able to alter or enhance one's mental state did not exist. Dr Richarz advocated a treatment of non-restraint in opposition to coercive torture-like methods practiced in the public "crazy houses" of that time. Some of the therapies which patients were subjected to in good fait, and today seem nonsensical, were the dousing of patients with cold water and the boring of holes in the skull to allow the escape of "bad fluids" - similar to blood-letting. Richarz could not completely do without some of the extreme methods when dealing with severely ill patients (eg strapping patients to their beds). Alcohol was administered as a medication.

Brahms, with Clara and Joachim, hurried to Schumann's bedside when news came to Düsseldorf from the doctors that they must hurry if they wished to see him again. He wrote:

"At first he lay for a long time with eyes closed, and she knelt before him, more calmly than one would believe possible. But after a while he recognised her. Once he plainly desired to embrace her, flung one arm wide around her. Of course he had been unable to speak for some time already. One could understand (or perhaps imagine one did) only some disconnected words. Even that must have made her happy. He often refused the wine that was offered him, but from her finger he sometimes sucked it up eagerly, at such length and so passionately that one knew with certainty that he recognised the finger...

Tuesday noon, we came half an hour after his passing. He had passed away very gently, so that it was scarcely noticed. His body looked peaceful then; how comforting it all was. A wife could not have stood it any longer..."


The room is light and peaceful; the chestnut tree beyond the window may or may not have been there then. The scene is almost unimaginable, but we imagine it anyway, as best we can.

I've just been to Bonn for the Beethovenfest. Packed an extraordinary number of amazing experiences into barely two days. Stand by for Beethovenfest post 2 - which might even be about Beethoven...
Posted by Jessica at 6:04 pm