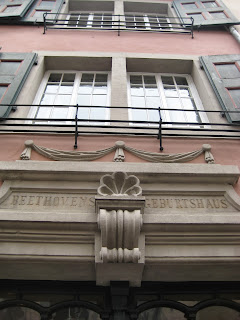 Bonn is roughly the size of Cardiff in terms of population (about 350,000). Yet the musical riches within this pleasant and manageable Rhineland city have to be seen to be believed.

The day before my pilgrimage to the house where Schumann died, I visited the one where Beethoven was born, only a short pootle away in the town centre. Here you can see two of Beethoven's pianos, his viola (yes, Beethoven was a viola player - get used to it...), his ear trumpets, his conversation books, his spectacles, his magnificent walnut-veneered writing desk - which Stefan Zweig later owned for a while - and the Heiligenstadt Testament, among many other exhibits; and I can thoroughly recommend the detailed audioguide. 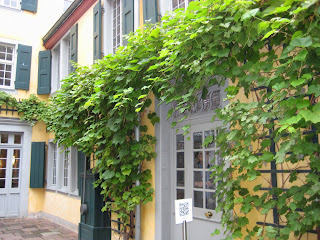 But the Bonn Beethovenhaus is much more than a shrine to the great Ludwig. It's a vital centre for musicological research, on the one hand, and a fine location for concerts, on the other; and it owns a raft of terrifically important manuscripts, notably that of the Diabelli Variations, acquired from a private collection after numerous fundraising concerts by the likes of Andras Schiff and others; there's a magnificent digital archive of huge value to scholars, yet also online resources to help introduce children to Ludwig's world. Do go onto the site and have a good old explore. 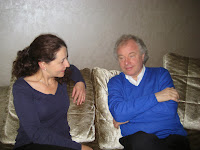 All of this was possible because I had to go and interview Andras, who has a big birthday coming up and needs writing about, but isn't in London again until well after my deadlines have passed. He is currently in the middle of a series of Beethoven sonata recitals in the Bonn Beethovenfest; I was fortunate enough to arrive in time for the programme that involves the Op.31s and the 'Waldstein'.

Listening to Andras play Bach or Schubert has often seemed the aural equivalent of swimming in Walchensee: you're immersed in cool, soothing, pure waters that run very deep indeed. Yet over the past decade his Beethoven journey has opened up new pianistic vistas: a different variety of deep heat, if you like, with a phosphorescent edge that makes the soundworlds of Op.31 No.2 in D minor or the mighty 'Waldstein' shimmer in a visionary way, while Op.31 Nos 1 and 3 bounced and swung with humour and clarity. Bonn's Beethovenhalle - a sizeable Rhineside creation from the 1950s - was packed to the nines and provided a standing ovation. The next morning we talked for two hours (pic above) about matters musical, technical and Beethovenian. Beethoven, Andras says, has given him new courage. More of this in the official outlets in the months ahead.

Huge thanks to the Beethovenfest for making this remarkable 36-hour trip possible. Really have bought the t-shirt - a purple one with a Beethoven portrait and the words LUDWIG LIVES, in which you might someday spot me jogging around Richmond Park. Prost!