Our very old friend Jack Maguire was for many years co-leader of the Bournemouth Symphony Orchestra, is now musician-in-residence for the Bournemouth Arts Festival and has a passion for Gypsy music and the folksongs of eastern Europe. He's had some training in the style from the Hungarian Gypsy violinist Josef Szegely. And he took a liking to the idea of doing a Hungarian Dances concert-of-the-novel with me. I'm heading south west tomorrow to meet him and pianist Barbara Henvest for a special performance in the Mary Shelley Theatre, Boscombe Manor. Full details and booking here.

We are adapting the programme in several ways: Kodaly and Faure both put in an appearance, there's to be some bonus Brahms at the beginning, and we are promised a certain authenticity of approach in Monti's Csardas.... There's also a special appearance in the interval by the Hungarian cellist Josef Koos, also ex-BSO, whom I will interview about his experiences escaping Hungary during the revolution in 1956. While I was researching the novel I spent a very happy day visiting Jo for a lengthy discussion. Anyone who has read the book will find certain aspects of him ever so slightly familiar. 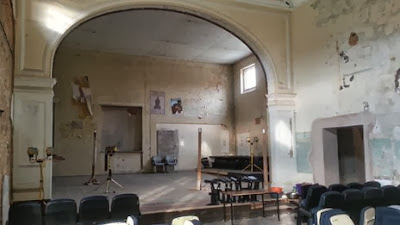 This theatre was built for Mary Shelley, author of Frankenstein and wife of the poet Percy Bysshe Shelley, in the 1840s. It fell into semi-dereliction (as pictured), but a community project began work on a loving restoration earlier this year, which has included the arrival of 220 seats from the demolished Bournemouth IMAX. Developers have now bought it. A news story from the BBC here.

Best of all: the weather forecast for tomorrow is really not bad, and apparently this place is 200m from the beach.

Do come along if you're in the area!
Posted by Jessica at 8:31 am