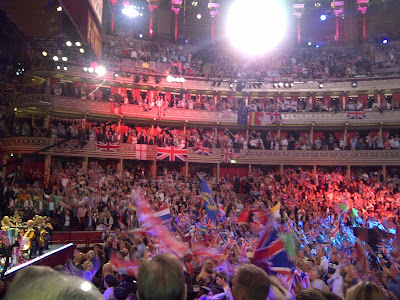 I was here the other night... Yep, Last Night of the Proms. Sneaky admission: I've been watching it on TV for decades, thinking about how amazing it must be to experience it. Last time I tried to go it was 2001, two days after 9/11, and the entire jamboree was ditched. This, though, was the real thing.

There's nothing else like it anywhere else, that's for sure. It may be crazy - it is crazy - but still, it felt like a true celebration of everything that we've experienced in that hall in the last two months, and of everything it stands for: great music for all, shared with love, open enthusiasm and absolute dedication.

There couldn't have been finer choices for the soloists. Nigel Kennedy, in case you wondered, is a truly mesmerising violinist. Nigel is Nigel and you take him as you find him: what other musician would trot on for the LNOP in a football shirt and carrying a cup of tea? Yet if his appearance bothers you, that's your problem, not his, because his playing is exquisite. The Lark Ascending was hushed, loving, sensitive, breathtaking. As for the Csardas, those who object to improvisatory interjections might do well to reflect that that is the genuine bit. Vittorio Monti is fake Gypsy music; Nigel improvising is the real thing. Nigel gets away with everything he gets away with - even bursting one of Marin's pink balloons with his bow - because he is a bloody incredible musician. Like it or lump it. 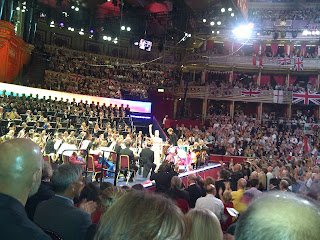 No sartorial questions over the divine Joyce DiDonato, who wore a blood-red Vivienne Westwood gown in the first half, and glittering peach in the second (left: curtain call), and delivered singing of such glory that it was a privilege to hear her, let alone sing along in 'You'll Never Walk Alone'. She dedicated Somewhere Over the Rainbow to the LGBT community "whose voices are being silenced" - handling this by explaining on social media beforehand rather than announcing from the platform, which I suspect will be the way of the future (nuff said...).

The whole evening was in fact a great celebration of inclusivity. Music was included from Handel to Anna Clyne. A woman (indeed, a gay woman) conducted the event for the first time ever, and judged the content of her speech to perfection. Bernstein's  Chichester Psalms are sung in Hebrew - and how beautiful they are, and how marvellous Iestyn Davies was as soloist. Nigel did his Gypsy improvisation alongside rare Brit composers Granville Bantock and George Lloyd (read about the astonishing story of that piece here). (Missed the sea shanties, though.) Verdi was there - the chorus of the Hebrew Slaves; and Wagner too - the overture to Die Meistersinger, the only one of his major operas that doesn't seem to have been bustin' out all over this year; and Britten, in The Building of the House and his arrangement of the national anthem to close.

What, then, of all those patriotic songs? Well, if you try to sing 'Land of Hope and Glory' but, for any reason, even if you are waving a flag (my nice Scottish neighbour, hedging her bets, had brought both, so she lent me the Union Jack), you just can't do the words properly given the reality outside the hall, it won't be noticed amid a crowd of 5000+ if you change them a teeny bit, in good and appropriate spirit, so... All together now:

"I LOVE EDWARD ELGAR,
HE'S THE MAN FOR ME!
HE'S OUR GREATEST COMPOSER
AS TONIGHT WE SEE..."

The important thing, though, is not the words. It's the singing. I believe I have tracked the magic of the Last Night, and it is not what we sing, but the fact that we do sing, and we all sing together, and we are the audience but we are joining in the concert ourselves, with the world's top musicians. And that's the ultimate in sharing music. And that, dear friends, is what the thrill of the Last Night is all about.