Antonio Lysy: a tribute to his father, Alberto

Handing the cyberspace today to the wonderful cellist Antonio Lysy, son of the now legendary violinist Alberto Lysy (1935-2009). Antonio's projects today include being co-artistic director of the Incontri in Terra di Siena festival in Italy, teaching at UCLA and exploring a range of glorious music in creative formats, from Bach to Piazzolla.

Back in 2001 Alberto and Antonio recorded the Kodály Duo for violin and cello together. This recording was released for the first time just a few weeks ago. Hungarian as Kodály may be, the album is in fact called South America and features works by Piazzolla, Villa-Lobos, Coco Trivisonno and more - paying tributes to Antonio's multifarious background and influences. The South American repertoire is irresistibly seductive and atmospheric, while the Kodály, performed with tremendous intensity, bravura and sensitivity, is more than a treat and a half. In this guest post, Antonio tells us about the coaching his father received from Yehudi Menuhin and Zoltan Kodály himself.

FROM THE HORSE'S MOUTH
A guest post by Antonio Lysy

I first heard my father playing the Kodaly Duo for violin and cello when I was 15. It made me really want to learn it with him, but his proclamation was, “No, it’s too difficult Tonino. Maybe in a few years… when you have hair on your chest.”
A few years later, I got my hands on the part when I was studying at the Yehudi Menuhin School.  I practiced so hard to prove him wrong, and brought it to his attention strategically, during the summer vacation. He was suitably impressed, which was a rare occurrence, and my father agreed to play it with me (I can’t remember if he checked my chest hair). We worked on it little by little, tenaciously. Little did I know it was to become the piece my father and I would perform most frequently together.
As the young protegé of Yehudi Menuhin, my father learned this work for a performance at Villa I Tatti, in Fiesole outside of Florence, with the Spanish virtuoso Gaspar Cassadò in 1958. Zoltán Kodály himself was staying in Florence at the time, creating a unique opportunity for the musicians to work with the composer in preparation for the performance. My father told me what Kodály shared with him and Cassadò.  The composer inspired them on so many levels and they fell in love with the work.  My father’s first main stage performance was with Jacqueline du Pré at the Sermoneta Pontino Festival south of Rome in 1963.
This rhapsodic piece is infused, as most of Kodály’s works, with a deeply-rooted folk style, emanating from his well-known ethnographic research, collected from the countryside of his native Hungary. As he coached my father and Cassadò he often spoke of limitations in notating the music. “You just have to know the style, and recreate the improvisatory nature of the rustic, or gypsy, folk traditions. I can’t write that out even if I tried. You may want to improvise, adding some of those short cadenza-like repeated notes, or play fewer notes there, depending on your mood,” my father remembered him saying.  In other passages, the opposite was true: “Here you have to be extremely precise - I have written it this way for performers to do strictly what is written.”  While these directives may sound contradictory at first, they become clear after one has studied the music carefully.  Kodály’s varied, yet structured musical language unites the rigid and flexible sections harmoniously to create a masterpiece. 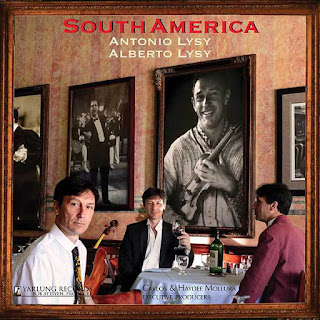 As Alberto’s son, I was thus introduced to this work through a unique aural tradition, learning a different musical language and intricate subtleties practically from the horse’s mouth. This was a privilege I knew not to take for granted, and a lesson about teaching music which I have carried with me ever since.
I value these aural traditions all the more dearly now, whenever they emerge, working from the source.  I take pleasure in passing them on to the next generation when teaching my own students. Speaking and writing about them is important, but communicating convincingly through the music itself is the ultimate goal.
We recorded the Duo in 2001 just before my father injured his left hand. We used Paul Sutin’s studio in Switzerland.  Having by then played it so often, we felt it was now time to record it. This recording is a loving tribute to my father and what I learned from him. I am very proud to share it, as a crowning of the efforts that went into its making.  Bob Attiyeh and I give our thanks to Paul Sutin and to the UCLA Herb Alpert School of Music for letting engineer Eric Swanson and me edit the takes in the new Evelyn and Mo Ostin Music Center.  As with the cello choir tracks on this album, we used Arian Jansen’s SonoruS Holographic Imaging technology to mix the recording into the form you can now enjoy.
AL

The recording is available from Yarlung Records, here.

Enjoy JDCMB? Support it here!
Posted by Jessica at 9:58 am