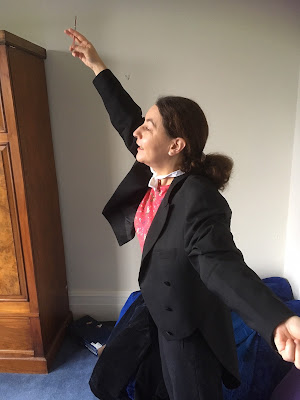 Here's the news you've all been waiting for. My career is about to undergo a radical transformation. I am going to be a conductor. And I don't mean buses.

I've been training secretly for quite some time. As you know, I started off with a music degree at a university which specialises in churning out conductors - even though it doesn't actually train them, there's a useful phenomenon that if you go there, you are magically endowed with the ability to wield a baton. Back in the 1980s, however, it never occurred to me that I might become a proper conductor with a proper orchestra. It just wasn't something you did if you were a girl. Now, though, everything has changed.

I've spent my whole career seeking ways to combine words and music. And what could be a stronger means to do that than using the former to order about the latter? So I asked a dear friend for some lessons...

It required courage, I admit. But then again, so does driving a car. You take your life in your hands every time you get behind a wheel, not because you can't do it, but because of all the other idiots out there on the road who think they can. Same thing with conducting. Now, don't get me wrong: I'm friends with many, many conductors and they are, in the main, wonderful people, intelligent, musical, creative and modest. But not all of them are. You have to keep reminding yourself: if such total plonkers can step up on that box in front of an orchestra, then so can I.

Of course, being married to an orchestral musician has proved handy, since at least he can tell me how not to conduct. One must learn, for example, not to be a "windmill", not to have one's mouth continually open, and not to be a traffic cop (though there are some resemblances with that process). I have a major advantage in that if I don't have to play the piano, I don't get nervous. And if you're conducting, you don't have to play the piano, or indeed any other instrument. It is impossible to play a wrong note. And if you forget something, at least the musicians know where they are, so probably nobody will notice.

Now I'm planning my debut, which will be on 29 March 2019 to take everyone's minds off Brexit Day. When we first moved to south-west London, there was a local orchestra called The Mortlake Murderers. It disbanded some time ago, but I am single-handedly reconstructing it from among friends, neighbours and contacts and we are going to do a smashing programme finishing with my favourite Beethoven symphony, No.7. In the first half, Tom will be the soloist in the Mozart G major Violin Concerto, and we'll start with Mendelssohn's Calm Sea and Prosperous Voyage (in honour of our brave little island drifting off alone into the mid-Atlantic...).

With any luck, I'll be able to have some coaching with Vladimir Jurowski. His likely departure for the Bavarian State Opera in 2021, we note, leaves a vacancy at the top of the LPO...

In the meantime, I'm practising at home and I think the look quite suits me, especially the combination (which I believe is a unique inspiration) of tailcoat and pink flowery t-shirt. I'm reliably informed that I need to work on my actual baton grip. But I believe the pen is mightier than the toothpick.