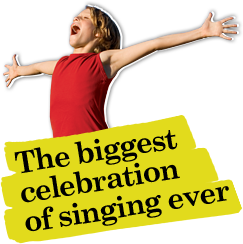 This weekend, all over the UK, there's a chance to take part in a charity project called 123sing! to raise money for music therapy for vulnerable children. They're touting it as 'the biggest celebration of singing ever'. Whether or not it really is that, it's still a terrific idea that deserves every encouragement under the sun. It's being spearheaded by Classic FM in collaboration with Making Music, the UK's organisation that does what it says on the tin, which includes encouraging voluntary groups to get together and make as much noise as they can. Proceeds go to the Classic FM Foundation and thence to music therapy projects.

If you know anyone who has an autistic child, or someone who went to Bosnia and observed the work that used to be done at the Pavarotti Centre in Mostar to help youngsters traumatised by the war, or if you saw Tony Palmer's documentary about Carl Orff - the seemingly unlikely founder of a system of music as therapy for young children who have disabilities which prevent them communicating as others might - then you'll know already that music reaches parts of the spirit inaccessible to plain language.

Music therapy can change lives. Help support it: go somewhere today or tomorrow and SING. Visit the website, here, to find an event near you.