The whole tenor of Italy? 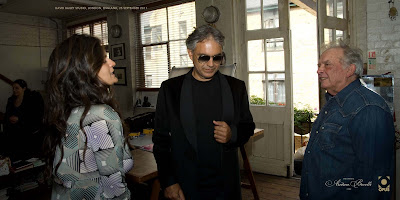 Returned to find my interview with a certain rather popular Italian tenor was in today's Independent. And I'm glad to say that it made a mention in the Editor's Letter in the i as well.

The interview took place at David Bailey's studio; watching the photo session was quite an experience. (Left, in the studio with Veronica, Andrea and David... I'm lurking in the background.) The famously gruff photographer remarks that "opera singers are always good fun". And if you want to spend a four-figure sum without decimal points on a massive 'Opus' about Andrea Bocelli, now is your chance.

I put aside my own mixed feelings about Bocelli's recordings to try to meet him on his own terms and discover a little bit about what makes him tick. The article was somewhat truncated in the paper, so here, dear readers, is: