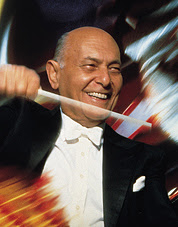 Today Sir Georg Solti would have been 99 years old. "My life is the clearest proof that if you have talent, determination and luck, you will make it in the end," he once said. "NEVER GIVE UP."

His life and musicianship remain impressive, idealistic and inspiring tributes to the blazing fires of his artistic conviction. Here's an extract from the beginning of his autobiography, Solti on Solti:

In February 1997, when these memoirs were nearing completion, I conducted Bela Bartok's Cantata profana with the Berlin Philharmonic and the Hungarian Radio Chorus, and while the performance was in progress a great realization came over me. I understood that my whole life, the whole journey I have made, is contained within the story of the Cantata.

Bartok, one of my teachers at the Liszt Academy in Budapest, had translated the Cantata's text from Romanian into Hungarian. It tells the story of a father who brings up his nine sons to be stag-hunters, instead of farmers or merchants - 'average' men. As the sons grow, they press their hunt into ever more remote areas of the forest, until one day they cross a haunted bridge and are themselves transformed into beautiful, enchanted stags. The father, worried by his sons' prolonged absence, sets out to look for them; eventually, he crosses the bridge, reaches a wellspring and sees the nine stags. He aims his rifle at the biggest of them, but just as he is about to shoot he hears the stag speak. The stag tells him that he is the eldest of the sons - the father's favourite - and he warns the father that if he tries to shoot any of the stags their antlers will tear him to pieces.
"Come with me," the father begs his sons. "Your mother stands waiting, lonely, loving, grieving...The lanterns are lit, the table is set, the glasses are filled..."

"We shall never return," says the son, "because our antlers cannot pass through the doorway."

The work ends with the man's heartbreaking realization that his sons have become alien to him and will never again be what they were before.

I had always interpreted this story as an allegory of Bartok's life, but as I conducted the Cantata that day I realized that I, too, was the stag. I was born and trained to communicate music, just as the sons were born and trained to hunt, and I was lucky to have grown up in Hungary, a country that lives and breathes music - that has a passionate belief in the power of music as a celebration of life. But one day, while I was still young, I was parted from my family and left my native country. I hunted and searched for music, and destiny turned me into the object of my hunt. The circumstances of life became my "antlers" and prevented me from returning home.

I do not mean to exaggerate my importance, but, like other internationally recognised musicians, I belong to everyone and share with the whole world all I have to offer. The musical and personal rewards of the life I have led have been great, but so have the sacrifices. And there were times when I felt that the rewards would elude me forever."

Solti conducted some of the most memorable concerts I was fortunate enough to attend - I still recall his Mahler 5 at the RFH in c1988, a rendition I long to hear again almost every time I witness any other conductor trying to bring off that piece. Then there was the evening that Decca celebrated his 80th birthday with a party in a big London hotel at which they presented him with the gift of a mountain bike. And of course I'll remain ever grateful to Lady Valerie Solti, who spoke at the Hungarian Cultural Centre launch party for my Hungarian Dances three years ago and described the resonances that its narrative held for the story, too, of Sir Georg.

After Sir Georg's death, Valerie and their daughters established the Solti Foundation, which gives grants to young musicians to aid them in the awkward transition from music school to entering the profession, helping with coaching, travel to competitions, hiring rehearsal facilities, etc. To date, they have received applications from 40 countries. More details here.

Medici TV has a special birthday tribute to him today, a film in which he conducts Wagner, Strauss and Beethoven: http://www.medici.tv/#!/georg-solti-wagner-strauss-beethoven

And here's a small extract from Mahler 5...