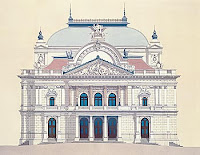 A distress call from Brno in the Czech Republic signals the latest cultural victim of the "financial crisis". The opera house in Brno is the country's second-largest, and has a long, distinguished history: not least, the city was the home of Janacek, composer of a raft of the early 20th century's finest operas, and it was also the birthplace of Korngold. According to our correspondent, the budget of Brno's cultural institutions has already been chopped by 20 per cent. The next step, it seems, is that the opera house's ensemble, chorus and orchestra are, allegedly, to be disbanded.

The email I've received suggests that the plan is that they will be taken back after seven months, but that there is no guarantee and the employees don't believe that that will happen. Besides, they have to eat, so they're not likely to sit about waiting, just in case, but will have to seek employment elsewhere. 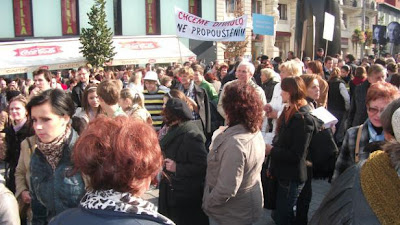 One of the immediate casualties is the planned staging of Korngold's Das Wunder der Heliane in the 2012-13 season, which would have been a co-production with Kaiserslautern.

There's a petition online to save the opera house's ensemble, and the affected performers would be mightily grateful if you'd like to sign it. It's in Czech. Click here.

Update: above right, a photo of the protests this situation has sparked. I've posted some Czech links in the comments box below, too.

Beware, friends. You don't know what you've got until it's gone. Institutions that have taken decades or centuries to establish can be swept away in one stroke of a pen. We live in a copycat world. Such precedents are much more dangerous than you might fondly imagine, of a Sunday morning.

Here's Lotte Lehmann - the first Heliane - singing the opera's most famous aria, 'Ich ging zu ihm'. JDCMB regulars will have heard it before, but that is no reason not to hear it again.